Just in time for the IAA 2017 and the Porsche Carrera Cup at the Salzburgring, ck-modelcars brings out limited special models in 1:43, which are only available here 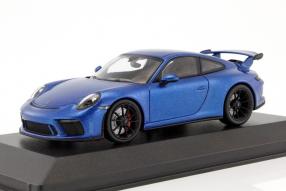 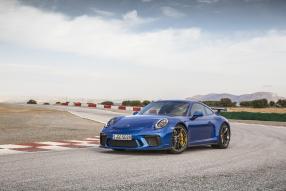 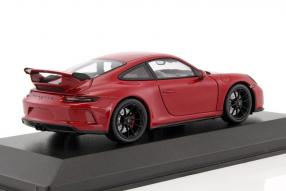 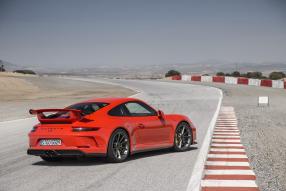 Something that has come up a little short in the blogs on the IAA 2017 are our highly exclusive models produced by Minichamps exclusively for ck-modelcars for the Porsche 911 GT3 series 991 II, although there is so much to say. Less to the model car, because the finish and the processing of the miniatures are in a known way of high quality and goodness. Minichamps has precisely transferred the proportions and therefore also the look of the model to the car models. The cars, painted in carmine red and sapphire blue Metallic, are held in 1:43 scale, made of zinc die-cast and limited to 333 copies worldwide. The details in the interior are the bang. The hit is also the performance of the model, which has broken the round record of the Nürburgring-Nordschleife: 7: 12.7!

Performance as in motorsports, systematic lightweight construction and an unfiltered driving feel - this is the short form for the Porsche 911 GT3. The latest version of the 991 II series celebrated its debut at the Geneva Automobile Show in March. Since 1999, the Stuttgart car manufacturer has been named GT3 in its program. A car of this type is basically built for the racetrack and has just been modified to be approved for the road. According to Porsche, the high-revving engine with 368 kW / 500 hp from 4.0 liters displacement is almost unchanged from the pure-race racing car 911 GT3 Cup. The chassis has been reworked compared to its predecessor and has a rear axle steering. Ideal for most customers who use their GT3 on the circuit.

With the standard seven-speed dual-clutch transmission PDK, specially designed for GT use, the fully-fueled 1430 kilogram heavy two-seater accelerates after standing start in 3.4 seconds to 100 kilometers per hour. Its top speed is 318 kilometers per hour. Optionally, the car is also available with a six-speed manual transmission. This sprints the car to 100 in 3.9 seconds and reaches a maximum speed of 320. Compared to the 911 Carrera S, the new two-seater is 25 millimeters lower. Further building blocks, which promote the driving dynamics according to Porsche, are the dynamic engine bearings and the rear axle cross barrier. The lightweight bow section and the lightweight rear section with exhaust air openings and new diffuser were also revised; Details that Minichamps has implemented fantastically.

A lot of attention to detail in the interior

As well as the subtleties of the interior: the GT sports steering wheel with a diameter of 360 millimeters originally comes from the 918 Spyder. Since the 911 GT3 is traditionally a two-seater, the seat backs are covered in the rear. Fittings, instruments and side panels were perfectly reduced. The model for our models costs in Germany from 152.416 Euro incl. VAT. The 911 GT3 finished on the north loop with a lap time of 7: 12.7 minutes; 12.3 seconds faster than its predecessor. Porsche test driver Lars Kern found optimal conditions with eight degrees of air and 14 degrees of asphalt temperature, according to the company. And what do we say? Hurry and secure one or both of our model versions of this fascinating model.