Manufacturer CMC delivers a model car of the high-end class in the 1:18 scale. The weekend could not have started any better 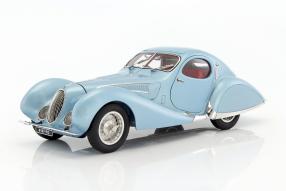 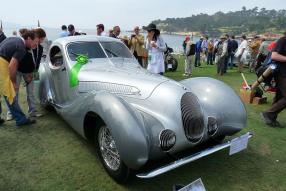 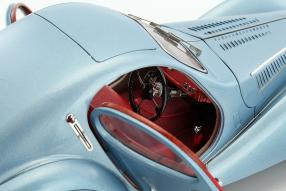 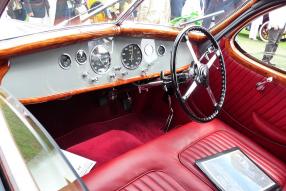 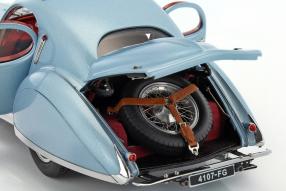 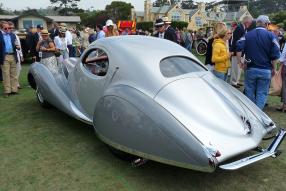 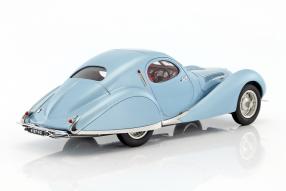 For more than 20 years the mold builders and management have practically practiced, built model cars of the highest quality and worked a bit with the Talbot Lago Coupé with the Teardrop body specially designed by body builder Figoni & Falaschi. According to his own data, this project was somewhat too demanding for the company headed by Shuxiao Jia in the opening days, can be read on the website. Now the model of the Talbot Lago Coupe T150 C-SS Teardrop Figoni & Falaschi of 1937 is reality in 1:18 scale. CMC has a number of color variants: the version painted in Graublau Metallic with the item number M-145 is available to our editorial staff; Miniatures in eggplant (M-179, memory edition), silver and black (M-165, M-166) still follow.

As "one number too big" the engineers of Classic Model Cars from Stuttgart saw an implementation of the Teardrop in the early days of the company. Practicing with other models seems to have helped, because in the look of the design meets the model exactly the model. Our readers can safely assess this by means of the attached photos. Rounding is one of the most challenging tasks in the development of molds for model lautos, and the T150 C-SS is a single round; a "dream vehicle with a body that is not to be surpassed in elegance and unsurpassed aesthetics". The first Teardrop coupe was presented for the first time at the Paris Motor Show in 1937 as a result of the exclusive cooperation between Talbot and the well-known car body specialists from France.

Giuseppe Figoni and Ovidio Falaschi built a total of 16 Teardrop coupés on the chassis of the Anthony Lago and Walter Breccia until 1939; eleven of which were on the chassis called T150C-SS, the wheelbase of which was shortened to 2,650 millimeters. This so-called second production series debuted in New York and was also to enter the annals of autograph history as New York model. The cars differed in details, for example in the arrangement of the headlights, which either stood freely on the mudguards, integrated into the body or conceived behind a cover made of metal and chromium-plated rods; as in this model. The vehicle was equipped with single-wheel suspension, Wilson's four-speed manual gearbox and the six-cylinder in-line engine, either 102 kW / 140 hp or 118 kW / 160 hp.

About 185 kilometers per hour fast were the vehicles so fired. Today, since we are sure, no collector with the cars will call such speeds. In 2006 one of the cars was auctioned for around four million dollars. The Teardrops were also advanced in the sense of having a metal sunroof, without which the author of this article does not enter any car in the world. Wood and leather belonged to the standard in these luxury automobiles, which is not much different today. But for the company, the Teardrops were more than just new cars, because the owners were broke when Antonio Lago entered the company in 1937 and started the new start with this legend among the cars. Until 1959 Talbot-Lago sold exclusive sports cars, then the company went to Simca.

The modellautos could also mature into a legend, the CMC handcrafted from a total of 1,488 parts. The Stuttgart-Fellbach company uses a precisely designed vehicle frame made of metal. The bonnet to be opened has perforated ventilation gills, that is, the collector can see through. A support rod keeps the bonnet in the open position. The perfectly designed cooling box made of metal fits perfectly to the functioning metal sliding roof, which is easy to operate. The elaborate, side body trim has made Classic Model Cars made of metal. The flush covers of the rear wheels with crescent shaped metal spades: handmade first-class cream.

The doors and hoods are of course designed for opening and thus also provide a view into the interior and engine compartment. The drive set has been designed with CMC's customary wiring and wiring as well as all mounting units. The ground group does not make the drivetrain easy to beat. Under the trunk lid there are support bars on both sides for holding the hood and a removable spare wheel. Keyword Wheels: spoke wheels in perfection with double-leaf central locks, better you can not make it. The dashboard with the instruments and switches is classified as a small piece of art. CMC has also donated the model car a leather-covered seat with foldable and also leather-based backrest. Very, very, very big cinema! Congrats, CMC!

The fact that it was not the best years of political and economic economies in which the Teardrops were sold, we know today from the history books: The Nazis and thus the Second World War were on the doorstep. Nevertheless, the era of an Antonio Lago and Ettore Bugatti Automobile, which were far ahead of their time, has produced. It is not for nothing that they are still unforgotten and highly praised for their clarity in expression. CMC, with the spirit of Modellautos being built, is in keeping with the spirit of this famous coach, because the finish in which Classic Model Cars produces miniatures resembles the pioneers of the time. That is why the models are also interesting for non-collectors looking for a jewel to set up their home or office.


Click here: The Talbot Lago in the shop, with video