In cooperation between Minichamps and ck-model cars the exclusive model of driver Jürgen Lässig in scale 1:18 is brought out. 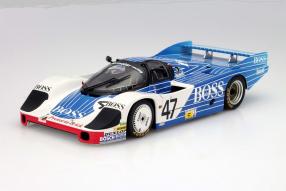 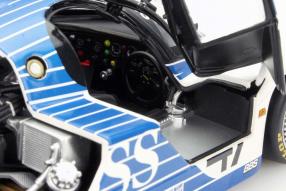 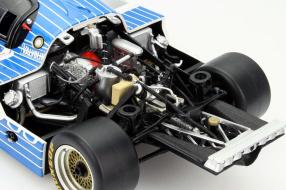 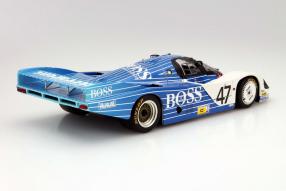 We just can't let go of the 24 Hours of Le Mans : Just yesterday we blogged about the 4 ½ Litre Supercharged  Bentley in  1:18 which has went through the night  1930 at the Sarthe. Today it is the Porsche 956 long-tail with the starting number 47 of 1984, which we are talking about in this blog. And as you might expect, it's a great thing to deal with such a successful model. As with the other, recently published model cars based on 956 the fabulous detailing in the cockpit and the engine compartment fascinates us even in  the miniature  by the Obermaier Racing GmbH  . After all doors and hood can be opened in the zinc die-cast model and allow a deep insight into the art of race car construction and  as the video shows the model.

The Porsche 956 long-tail, on Dunlop tires,  with the starting number 47,  has not come that far in 1984 at Le Mans: The original of our model had   an accident after 147 laps and came in  34th place overall. That probably saddened  fans of the drivers team Jürgen Lässig, George Fouché and John Graham but   is perhaps an advantage for the collector of model cars, because not often companies developing car models bring out such a far back placed model. So the Porsche 956 is in the colors of clothing manufacturer Hugo Boss is from our point of view a model less frequently used; The two partners Minichamps and ck-model cars  close a gap here and bring joy  the fans of the Porsche 956 long tail with a sensationally good,  model limited to 500 copies.


The car is available exclusively at ck-model cars  for 129,95 euros under item number 183 846 947 Model and corresponds in its design of course with  the previously already deliverable counterparts,  the Porsche 956 New Man from 1985 and the Porsche from Team John Fitzpatrick Racing from 1983 which we already reported about on July 3rd accessible via this link ; also exclusive models for ck-model cars. As we have already discussed in the article the original interior features, the detailed engine compartment and the steerable front wheels, we use the model presented here  to have a closer look at  the driver of this car- Jürgen Lässig. He unfortunaly gets  less popularity than other drivers like Walter Röhrl and Hans-Joachim Stuck.

Who is Jürgen Lässig