Our trailer at the Motorsport-Super-Weekend in the Eifel. In the partner shop, the Stefan-Bellof-Collection celebrates World Premiere. Ck also in Monaco. 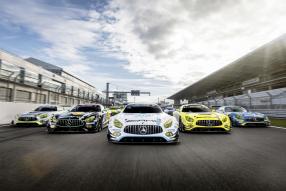 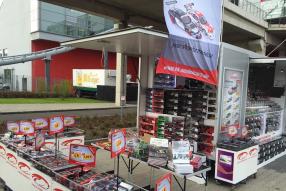 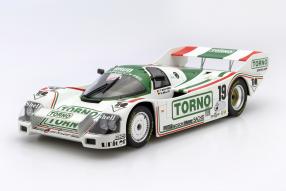 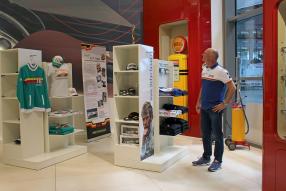 Wow, what a week: just this weekend with the two DTM races at the Lausitzring are behind us, because the drivers of some vehicles have to open up not only for the 24 hour race at the Nürburgring, but we also have the same To prepare for the F1 Grand Prix of Monaco: The weekend after Christ Ascension - Father's Day, boys, lets celebrate - is perhaps the most important of the year. Ten of the 18 DTM drivers will also compete in the ADAC Zurich 24h race 2017, the highlight of the season on the North loops. After the service on the modern high-tech cars of the DTM, the drivers in the Eifel meet the longest and toughest race track in the world, where it is not just the technology, but also the physical and mental endurance and hardness of the riders.

Seasonal peak in the Eifel

At the start: 500 competitors, who compete in 161 GT cars and touring cars: a spectacle unlike and definitely one of the biggest challenges in international motorsports. As a title defense, the Maro Engel, a native of Munich, joins the Black-Falcon team with the number 1 in the Mercedes-AMG GT3. With Edoardo Mortara and Mercedes-AMG-HTP, the second-placed team of the previous year also won the competition with a star from the DTM squad of the brand. Audi from Ingolstadt sends three out of six drivers from the DTM; At BMW, all six DTM drivers are on the ground at the 45th ADAC Zurich 24h race. And, of course, you will find our trailer with all the novelties in the Ringboulevard opposite the Nürburgring driving school (pictures up and right from 2016). Just a cat jump away from the ck partner shop, in which you expect a world champion.

World Champion at the Nürburgring

For the first time, you can marvel at the Stefan-Bellof-Collection: Caps, cups, pendants and superbly made polo shirts with embroideries 6: 11,13 can be seen there; With the lap times referring to the fastest time ever, in which a racing driver ever circumnavigated the Nordschleife: Stefan Bellof, in the final training for the running of the FIA ??World Sports Championship 1983 at the Nürburgring on a Porsche 956 K. A time to write the story Should still provide unbelieving amazement and create a very special connection between the Giessen racing driver and the traditionally rich course in the Eifel. By the way, as we wrote last weekend in this blog, 2017 90th birthday celebrates.

In any case, Stefan Bellof is still present in motorsport circles, not only because of his enormous driving skills, but also by his sympathetic nature, his big heart and contagious laughter as if he were among us. His brother Georg "Goa" Bellof as the licensor of the Stefan-Bellof-Collection has already looked at the shop. The collection also makes its debut on the same weekend at the Grand Prix of Monaco, where the third place of the Giesseners at the Regenrennen 1984 is the focus, to which a fantastic T-shirt is presented. Just as well as ck-modelcars on the Rue Grimaldi, in the center of perhaps the most glamorous event of the Formula 1 every year. We are looking forward to welcoming you at the Nürburgring, as well as in Monaco! The weekend of the 25th to the 28th May 2017 - the race weekend of the year!