The goddess in this delicate colorin Only available with modelissimo and ck-modelcars. We look at a unique car model in the 1:18 format. 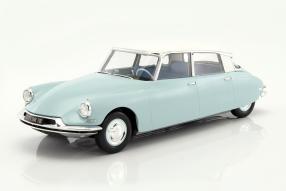 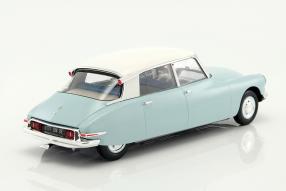 The model of the DS 19 is not quite as unique as the headline describes, but with an edition of only 1,000 copies it is still quite extraordinary. The dealers modelissimo and ck-modelcars have decided to cooperate with one of the most beautiful automobiles in the history and in cooperation with manufacturer Norev issued a Diecast edition of the Citroen DS 19. The model takes the sedan of the year 1959 as an example, is under the item number 181566 to have and light blue-white lacquered. The original version of DS debuted in 1955; On 24 April 1975 production was stopped after 20 years and 1,456,115 vehicles. The limousines were from 1964 on also available in a luxury version, which was under the nickname Pallas as well as as five-door Kombis.

Designer André Lefèbvre and designer Flaminio Bertoni decided to use a platform frame welded to the car body skeleton as a load-bearing structure, on which the non-bearing parts such as mudguards, hoods, doors and roof were bolted to the frame. The roof of the saloon is made of glass fiber reinforced plastic, the engine hood is made of aluminum. As a result, the French proved just as progressive as with the introduction of hydropneumatic suspension in conjunction with the high-pressure hydraulic system. New were the front disc brakes, the two-circuit braking system with load-dependent high-pressure brake, which was supplied with pressure via the central hydraulics as well as the semi-automatic transmission as well as the steering.

The model of our model is the revised version of 1959, which had an engine with 55 kW / 75 hp power as well as new, longer and rear rounded fenders with embedded instead of mounted back-up radars. We do not see much of the technology, because the model car does not have to open doors and concentrates on the representation of the ingenious design design as well as a interior decorated with many details, the seat cushion of which corresponds colorfully with the outer skin. Friends of the vehicles of Citroen will love it, because the rare color and the finish of the workmanship are better than the cars on the street they owned. Look and look perfect. A real exclusive model.