More fun than a test report with the handbrake pulled on VOX, the Model cars in the scale 1:43. 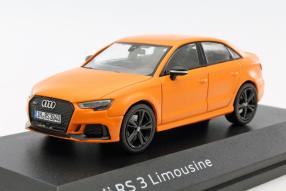 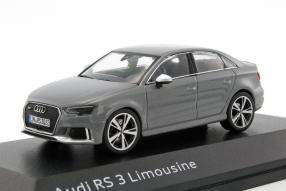 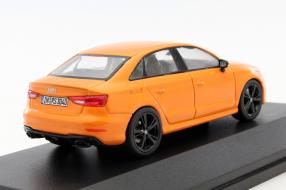 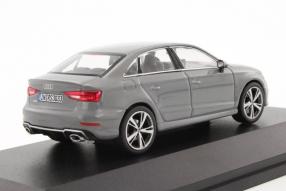 Did you see the Automagazine "automobil" on VOX last Sunday? Presenter Andreas Jancke introduced the new Audi RS 3 sedan to the viewers, to which iScale currently offers two modellautos: the version in Glutorange and since today also the one in Manhattangrau, both in scale 1:43 and made from zinc die-casting. With an edition in Tangorot, Andreas Jancke was traveling in Oman, but could not really try the test car because of the extreme speed limits in the desert state. In the urban area, the thresholds for lowering the tempo were in the way, outside the city lurked everywhere speed traps and the airfield, which VOX chose to drive, emerged as a restricted area of ??the military. We ask ourselves: Why does the station transport its fleet of test vehicles to such a country?

The basic data for the Audi RS 3

The Audi RS 3 as a sedan is a quite fast car: from zero to 100 km kilometers accelerates the Ingolstadt Viertürer in 4.1 seconds. 4.6 seconds needed a Porsche 911 - the RS 3 is thus faster than the basic version of the legendary sports car from Zuffenhausen with its 272 kW / 370 HP; The Audi is powered by 294 kW / 400 hp. The fact that the Audi is half as expensive as a nine-car, is mentioned only marginally. The 2.5-liter TFSI brings the RS 3 with its five cylinders to a top speed of 250 kilometers per hour; Optionally, it can be raised to 280. It is switched by a seven-speed dual-clutch transmission. With the standard Audi drive select vehicle dynamics system, many components, such as engine management and steering, can be adapted to individual driving conditions.

IScale perfectly matches the sporty lines of the Audi RS 3 sedan. The appearance of the model is in line with the design of the model. The details, which stand out, include the striking, but not interrupted radiator grille and the correctly replicated headlights with blackened layout. The front apron is superbly worked out, the reduction of the light alloy wheels as well as of the brake discs and -saddles from a craftsman's point of view flawless. The well-known Audi look awaits us at the cleanly processed rear. In the interior, the collector finds a formally correctly reproduced mixer panel and multimedia screen again, correctly styled seats as well as door panels on the high level, as we know it from iScale and it is more fun than such reviews.

Why is VOX testing in Oman?

It is not the TV stations, but the car makers who make these decisions. They are driving the car fleets by the halfway around the world in a costly way to test the cars. Immense sums are spent on what no Audi buyer actually has. In order to get to know the cars, Jancke would have been able to make a lot of laps with the Audi RS 3 in the surroundings of Düsseldorf and Cologne, as there are fantastic roads in the Rhineland and the Bergisches Land where driving with an all-wheel drive like the RS 3 is a lot of fun prepares. The two Modellautos of iScale are also fun, which is why we would like to warmly recommend them to every Audi fan. But test reports with the hand brake pulled are not so our thing, right?