Norev presents a very nice Diecast Modellauto shortly after the Toy Fair 2017 after the single piece of 2008. 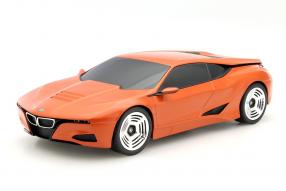 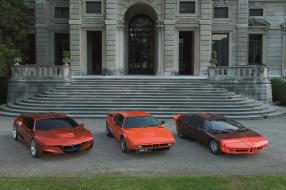 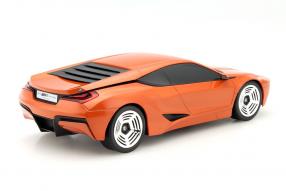 It was a surprise to the Concorso d 'Eleganza Villa d'Este of 2008: On the occasion of the 30th anniversary of the BMW M1, the Bavarian automobile manufacturer presented the study M1 Hommage. The concept car was designed as a design study to revive the lines of the original model with the specific design features and reminiscent of the M1 mid-engine concept. The following year, the car was also shown at the motor shows in Dubai and Melbourne, but the expected series production did not start the Bayern despite a positive response. Although, the front is reminiscent of the BMW i8, which with its electric drive is more oriented towards the future than in the past. Norev, in turn, has accepted serial production.

The French from Vaulx-en-Vaulin have teamed up with BMW and put on a stunningly beautiful as well as handy well-processed model car. It inspires with a harmonious lines and the makellosen varnishing, in color and appearance perfectly matches with the only once built model. At the moment, it fits perfectly well, because Minichamps is currently using the racing versions of the Procar series, the right model cars from the motorsport. However, even the M1 of the original version is a re-edition, because it also adopts another BMW as the model: the BMW turbo from 1972, which anticipated the medium-engine concept and the lines of the front of the M1 and was used by designer Paul Bracq as a reference .

In 1976 the development of the BMW M1 began, in 1978 he was introduced; In 1979 and 1980, the Procar series with its monstrous wings equipped M1 for excitement on selected racetracks in the supporting program of Formula 1. The drivers were piloted by drivers from the F1. In 2008 the debut of the mini-engine M1, built in a small series, took place, which the study should recall as already mentioned. However, as far as personal opinion is concerned, our blogger still likes the M1 of 1978. The clear, factual and edge-embossed lines are still timeless, were slightly diluted in the M1 Hommage, but are still very good to recognize from the bow to the rear blinds.