A 1:18 model car has managed to bring summer back. Mazda is a rare guest in our blog: Here the new roadster. 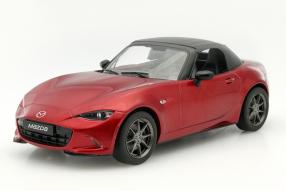 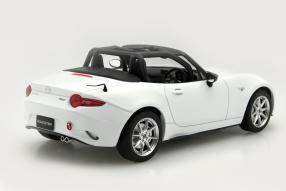 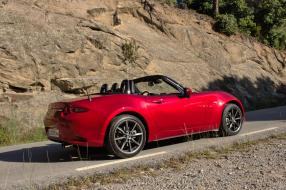 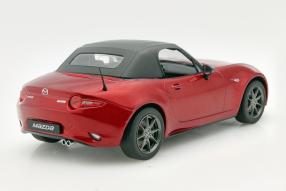 Hello, dear friends of well-designed model cars, are you also like us? A look outside and the best we can say is that it remains at least dry. The precipitation in the form of snow, rain and freezing rain can really spoil the mood and the fun of driving. As the idea of ??better times loosens properly, and this sparked with us the new model car to the current Mazda MX-5, which the label Triple9 in three variants delivered to the specialist dealers. The 1:18 scale models come in ruby ??red metallic, onyx black metallic and purish. The series internally marked with the abbreviation ND is the 4th generation of the two-seater since 1989, which triggered the comeback of the small, sporty convertibles in the large series.

Success story made in Japan

The roadster, which has been exported from the land of the rising sun, is a true success model, since the first 5,000 pieces a year have already reached 140,918 copies by the end of 1990. The MX-5 is the best-selling model with well over a million cars up to April 2016 Roadster of the world. He cited famous ancestors such as the Triumph Spitfire or the Fiat 124 Sport Spider, brought out competitors like the Fiat Barchetta, which were however already discontinued. But with the current 124, he shares the platform, which is certainly not detrimental to his future prospects. We are surprised that with Triple9 a label operating on the margins of the market has received the license to reduce the ND, but the result of the license can be seen.

Triple 9 has perfected the measurement-sharp contours of the 3,91-meter-long car body perfectly in 1:18 scale. The processing of the details such as headlights, radiator grille insert, taillights and door handles makes us smile a smile - as if we had seen the sun. The plastic inserts for daytime running lamps and side flasher as well as windshield and frame are very well done. The crisp, short tail reflects the dynamics of the model correctly; Replicas of brake discs and saddles as well as the rims round off the appearance of the car model upwards. The interior can be viewed without hindrance by the standard softtop and offers all the details that we expect on this scale very well. Also here form and look agree: Including Navi screen.

Key data on the prototype

The doors and hoods of the model made of zinc die-cast model are unfortunately closed, but nevertheless the three miniatures fit very well into collections on the topic of sports cars or cars from the Far East. The engines bring in the model of 1.5 liters displacement 96 kW / 131 hp and the stronger version from 2.0 liters 118 kW / 160 hp; Each to be switched manually with six gears. With automatic, there is only the stronger drive, which in turn is only available in the variant with fixed folding roof. Triple9, by the way, also recreated the version for the MX-5 Cup, which we see in front of us with the white model and the roll-over bar - see the video above. Our conclusion: Triple9 builds beautiful model cars, which gives us a little summerfeeling in the dull winter. Comes well into the new week!