In 2002 Volkswagen made its bestseller steam. The makers of this Modellautos in 1:18 scale have also made a lot of effort. 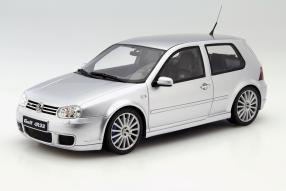 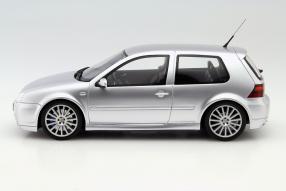 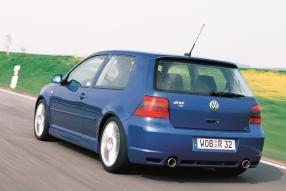 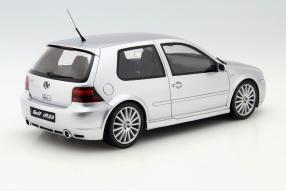 One must be said about the ladies and gentlemen of OttoMobile or Otto Models: in the effort to a clean finish of their models they show the same efforts as once Volkswagen with the quality of the Golf IV. 1997 came the fourth generation of the golf with the internal series designation 1J the market. At that time VW was striving to introduce new quality standards. Thus, the body was electrolytically fully galvanized, thus establishing the twelve-year guarantee against corrosion. The reduction of the gap dimensions became the external visible graduation of the new philosophy. A new, overhead engine suspension with a central pendulum support on the wagon floor was responsible for achieving a high level of rest and minimizing vibrations. In design, the Golf IV set standards that made it the model for the Golf VI.

And as usual at Volkswagen, the series was crowned shortly before the end of its running time by a particularly powerful model, the R32. The R in R32 stands for Racing and thus establishes a connection to the racing division Volkswagen Racing, formerly known as the Volkswagen Motorsport. With the 32, the displacement capacity - 3.2 liters - entered into the model designation. Under the bonnet: A six-cylinder engine in VR design with 177 kW / 241 hp as a four-valve and 320 Newtonmeter (Nm) maximum torque. The friends of the high-quality Modellautos from Otto do not see much of this, the flap remains the same as with the miniatures made of Resine plastic, but also locked here. But as a compensation, the label offers a handy very good execution of the details on the outer skin, by which the R32 from 2002 of the standard golf differs.

The model car and the details in the check

Even with the low-lying body, it begins: the Golf R32 is equipped with a 20-millimeter lower sports suspension and 225/40 tires on special 18-inch aluminum rims. These were, in the name of Aristo baptized, originally supplied by OZ, later by Ronal, and have been perfectly reproduced by Otto. The three large air intakes in the front apron, the side skirts and the roof edge spoiler as well as the two tailpipes of the exhaust system are also given this rating; Details, very well implemented in the scale 1:18. In the interior, the model car does not go down: sports seats with integrated headrests and a seating model with the same appearance as the model, as well as a flat-panel dashboard round off the very good impression of the model car.

The Golf IV R32 was fitted as standard with all-wheel drive, a manual six-speed transmission or the double clutch DSG at an extra charge. In the top reaches the car 247 kilometers per hour. The model car is limited to 1,500 copies; 5,000 should be the model, but after the rapid sell-off of the R32, especially in the US, Volkswagen increased production to 7,000 pieces for Europe and 5,000 for export to the states. Also because of the very good processing of the headlights, the well-fitting glazing and the roof antenna, we give the model the top marks. No question that we will have the model at the upcoming Essen Motorshow from November 26th to December 4th for you in Hall 1, Stand 123. And in the above embedded video, there is a lot of pre-info to the EMS. Until then and a nice weekend!