There are still two races in this Formula 1 season. To the image of the seriemer in the motorsport fits a coupe, to which a limited model appears. 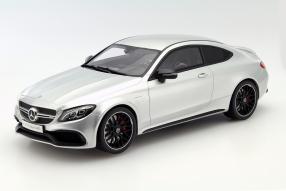 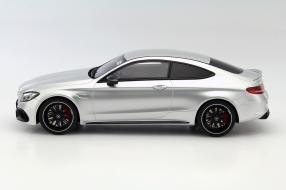 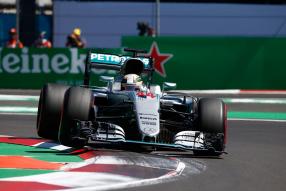 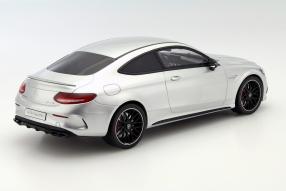 We have known for a long time that it is sporty at Mercedes-Benz. The fact that the real sportsmen of the Stuttgart autoboy bear the label Mercedes-AMG has not been so long since the naming was not made public until the autumn of 2014 with the presentation of the new Mercedes-AMG GT and the 11th November of the same year with the introduction The submark Mercedes-Maybach. Before the weekend of the Grand Prix of Brazil on the circuit of Interlagos "Autódromo José Carlos Pace" presents the small series GT-Spirit with the Mercedes-AMG C 63 S Coupé a special beauty in this area. High-quality finish and painted in iris silver Metallic, the model of the V8 Biturbo comes with always closed doors and hoods, but in a limited edition of 1,500 pieces worldwide.

The model car from GT-Spirit is made from the resin Resine. First class are the contours of the massive bow apron, the reproduction of the radiator grille with the double brace and the knowledgeable reproduced headlights. The transition from the C-pillar to the rear fender, which can transport the eroticism of the two-seater like no other detail into the consciousness of the beholder, pleases us very much. The interior is in the cool design of the sub-brand and offers no reason to criticize, because all details, instruments and surface structures have been replicated according to the standard of GT-Spirit model builders. Compliment for the finish and finish, which results in a top grade for Resine models.

The numbers from under the hood

A word still to the performance data of the model: 375 kW / 510 hp at 5500 to 6250 / min, 700 Newtonmeter (Nm) maximum torque. Values ??that Lewis Hamilton and Nico Rosberg could not do well on the Interlagos circuit. The fight for the world championship in the # F1 is decided between these two pilots: Nico leads the World Cup with 349 points, Lewis follows with 330 meters. A second and a third place, which brought Nico Rosberg 18 and 15 points, are the title to the world championship title; Even if Hamilton won two more times each with 25 points each. But Nico remains realistic: "There are still two races to go and everything can happen in Formula One!" Right, he can fail or land further, then the bill looks different.

Finishing is a must!

If Hamilton fails in a race, Nico reaches a third place; Nico only falls out once, then the World Cup will be succumbed if Lewis wins. Hamilton is right with his testimony to the 20th round in this year's World Cup: "You have to fight to the bitter end, since the beginning of my Formula 1 career I have seen that the sheet itself can turn at the very last moment You have to fight to the bitter end, I've never won in Brazil and I want to change that weekend. " We wish him good luck, but of course, Nico Rosberg also keep his fingers crossed.

Oh, and we wish you an exciting weekend! All the best and until Monday!