11.10.2016Ck-modelcars at the Motorworld Classics Berlin

From 6th till the 9th October 2016, the second edition of the Autoliebhaber show took place at the Funkturm Exhibition Center. We were there. 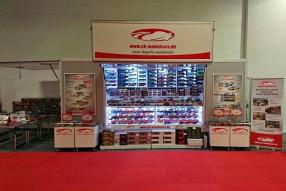 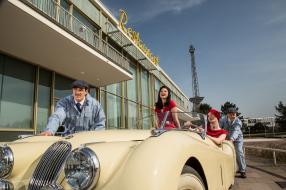 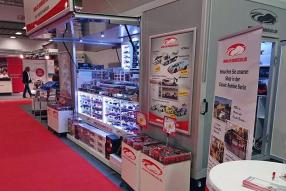 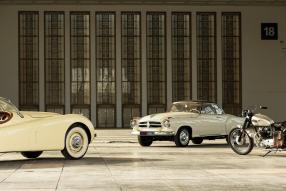 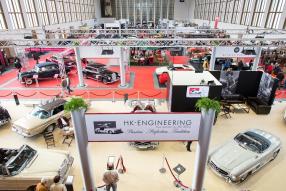 It was the second appearance of the Motorworld Classics in Berlin, which last year celebrated its premiere in the historic exhibition halls and in the summer garden under the Berlin Funkturm. The organizers had a lot for the car owners and collectors, car clubs and Szenefans. Automobile treasures of past epochs, two special exhibitions and an auction, a private car market and other scene highlights, a picnic in the summer garden as well as shows and music from the 1950s and not least the stylish design concept - all this and much more made the Motorworld Classics Berlin 2016 To an experience for the audience. To an additional hall and the theme of classic motorcycles expanded, this time even more high-caliber exhibitors at the start. And also ck-modelcars was there.

We had the honor to welcome numerous customers and friends of our company in Hall 15, where we were allowed to park our sales trailers, which were specially built for trade fairs and racetracks. The stars at the audience were the innovations of GT-Spirit and Ottomobile, as for example the Bentley Continental convertibles, the Porsche 911 in the variants from the different decades, the BMW M5 of the first generation or the Audi 80 GT. Numerous advertising models from Mercedes-Benz in the 1:18 scale, the Bugatti Chiron as the top-of-the-range Bburago and the Young-timers like the Mercedes-Benz L 319, VW Beetle, VW Golf I and VW Bus T3. We also packed books on racing: we read the cold autumn days - just the right thing for the next few weeks.

The organizers of the fair were MoWo Messe- und Veranstaltungs GmbH & Co. KG and Messe Berlin GmbH. 220 national and international exhibitors distributed their activities to eleven exhibition halls and the spacious outdoor area. For the first time, the BMW Group Classic and Porsche, Ferrari Eberlein and Rosier Classic were the stars. This meant that the theme of the car also came back from its point of view to a historically significant location. In 1921 the then still young German automobile exhibition took place in the same exhibition halls - the predecessor of today's IAA. Under the motto "Racing Legends", the Palais am Funkturm also showed original vehicles from the career of the seven-time Formula 1 world champion Michael Schumacher, who has been the subject of our blog contribution yesterday.

In Hall 12 and the summer garden more than 30 oldtimer clubs were presented. The ADAC organized for the first time the so-called "Youngtimer Tour": around 50 vehicles explored Berlin and the surrounding area in two days' taps and one night tour. Fun, culture and enjoyment were on the agenda as well as skill, even driving and games. On Saturday, in cooperation with the Berlin online auction platform Auctionata, the live transmission of a classic car and bike auction took place. Under the hammer came, for example, a 1992 prototype of the Porsche Carrera 964 Speedster, coveted classics such as a 1971 Rolls Royce Shadow Corniche Cabriolet, an Alfa Romeo Montreal 1972 and a Ferrari 512 BB.

Throughout the exhibition the artists of 'Sgt. Wilson's Army Show 'or' The Lord's of the Gas Station 'with their live shows on the stages, but also simply through the gaits; Supported by the Berliner Trio 'DIE LADYs' with music from the 1920s and 1950s. The pop art artist Bernd Luz showed a selection of his colorful collages around very special vehicles and typical motifs from their time. Werner Eisele presented his photographic tribute to the early years of Formula 1 and international sports car racing. At the end of the day, the conclusion is that not only Berlin is always worth a trip, but also the Motorworld Classics, which opens its doors again next year. And until then we are looking forward to your visit to our shop in the Classic Remise Berlin on the Wiebestraße - open all year!