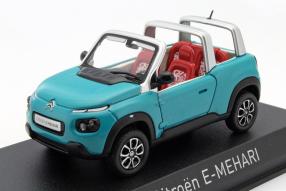 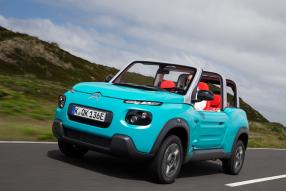 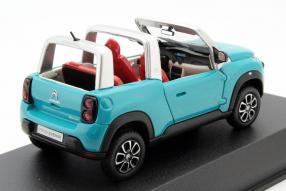 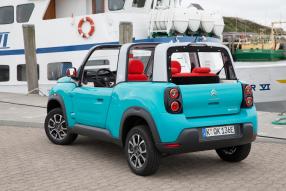 In the TV broadcast VOX "automobil" he was guest last Sunday; Since this summer it is also available in Germany: The Citroën E-Mehari. The electric car carries on the famous name of the Méhari, which has entered the history as a Buggy of France, which, with its plastic body on the basis of the Dyans, left 144,953 times in civilian form plus 15,000 additional copies for the French army. At the end of 1987 the production of the beach cart, which was even available with all-wheel drive, was discontinued. The E-Mehari is reminiscent of this predecessors, the grooves on the doors, which moved over the whole car during the original version. Like this, the new E-Mehari is also made of plastic and offers a tarpaulin top, but it has firmly mounted overrunning brackets. Norev has made a very nice miniature to this vehicle.

Look at the model

The electrically powered Cabriolet is powered by four seats and develops an output of 35 kW / 47 hp or 50 kW / 68 hp in normal driving mode. Citroën has tried to transfer the characteristics of the Ur-Méhari from 1968 as far as it goes to today's version. This starts with the body, which is also made of plastic in the new E-Mehari, but of course, more modern and safer material, the so-called thermoformed plastic, which has already been dyed. Painting work is therefore superfluous; The elastic plastic is also digested by the smaller remover. The soft top can be opened at the front or rear or fully open; Depending on your mood. The convertible backrest provides more space when needed. Just like the Ur-Méhari, the car has to be cleaned / sprayed outwards and inside with a simple garden hose.

Our model, painted in the color ocean blue, is made of zinc die-casting; Also available in the shades of bright red orange and yellow submarine. The seat covers are beige or red-orange; The latter is a delightful contrast to the exterior color of our model car. As usual, Norev has met the proportions and the look of the E-Mehari very well. The loosely, airy life setting of the model is also found in the model with the attractive seat cover patterns. The exterior mirror housing, the fan box and the surrounding plastic coverings are blackened in the best way possible. The friendly smile, the Citroën with the model, can be found also with the Norev counterpart.

Battery of the E-Mehari for rent only

Citroën also says that the E-Mehari will seduce those who are looking for a colorful and expressive vehicle: hip, free, unorthodox and a bit cheeky. Quote: "A true Freigeist in the automobile landscape". Through the electric drive, the car is also silent and stress-free. For 27,000.00 euros the model starts in the market; 87.00 Euro monthly rate are to be included for the rental of the battery for eight years additionally. The range of the E-Mehari is indicated with 200 kilometers, its top speed 110 kilometers per hour. The fabric roofs are available in black and red-orange design. A charging time of eight to 13 hours is to be considered depending on the line. The E-Mehari is produced in Rennes in Brittany. More about Citroën and the Paris Motor Show in the above embedded Video.