Not resine plastic, but real die-cast zinc, a great model of Le Mans 1997 for collectors: The people from Aachen in detail-rage 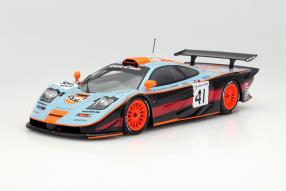 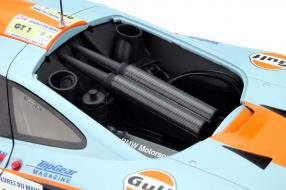 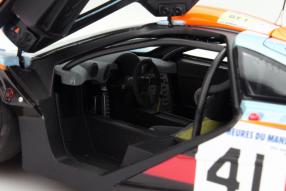 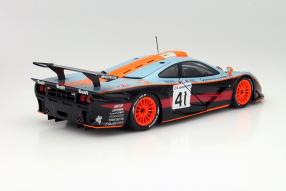 Le Mans 2015 is already history. We had planned let the issue rest  for a few days and start looking  forward to Goodwood  2015, but with the new 530 133 741, that Minichamps is bringing out , we like to come back once again to the 24 Hours of Le Mans. More specifically the one from 1997, in which the driver pairing Jean-Marc Gounon, Pierre-Henri Raphanel, Anders Olofsson came in  2nd place for the Gulf Team Davidoff. Minichamps made a  great model  from the traditional racing car: To our surprise, not in resine plastic, but from zinc diecasting and therefore with opening doors and hoods; Components, behind which perfect race and model car technology is to be found.

Fascinating details  made by Minichamps


The car available for 149,95 Euro  is limited to 2,000 pieces. It's really fun to wallow in the numbers about this: The miniature consists of 104 individual parts with 109 decorations, of which 61 are  mask sprays, 14 tampon prints,  10 decals, 20 Free sprays and  4 chromed parts. There is also an authentic interior equipment with an instrument panel in Alcantara look, working front wheels and you can see the powerful mid-engine. Although the performance is mostly of detail and less of horsepower : Lifting the flap behind the cockpit  brings a perfect reduction of the 6.0-liter  twelve-cylinder BMW ; from a time when  McLaren with the people of Munich,  did not cooperate with Mercedes-Benz, and certainly not with Honda like nowadays.


There are motorsports fans who claim that a race car only looks  like a race car when it is painted in the Gulf colors. We  don't agree 100 % but have to admit that the classig combination of colors look stunnning . Apart from the look, the model car in 1:18 scale inspired by a harmonious appearance, equivalent to  the original exactly. The small front service door can be opened as well as the butterfly doors which show  the way to the cockpit: looks are race car typically ; However, no detail is missing: console for the switch, the bucket seat in the middle, the multicolored stick shift and the roll cage copy the interior of the original perfectly . Pitman arm and the bellows on the steering wheel also look to be a perfect copy.


The processing of each part - especially those of the rear lights - leave no room for criticism. Everything fits perfectly. And the rear lights have probably  seen many counterparties, because after 360 laps the car with starting number 41 ended up on the 2nd place. One place ahead of the McLaren F1 GTR Team BMW Schnitzer. The McLaren F1 GTR Gulf Davidoff team with the starting number 39 Minichamps is bringing out  under item number 530 133 739 in 1,500 copies; imitating the driver combination Bellm, Gilbert-Scott and Sekiya . After failure after 326 laps,  the car came in on  19th place only. But no matter,   this couple will still make a great impression in your showcase-if you want-  because the cars turn out just a bit more elegant than cars without Gulf look.