01.08.2016Minichamps brings out new version of Land Rover Series I

A really successful move to bring the granddaddy of all SUVs 1:18 on the market; technically perfect and with many details: The good old days. 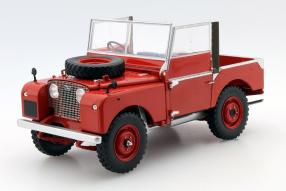 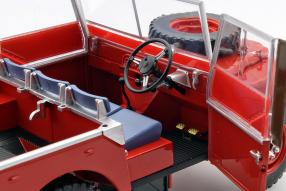 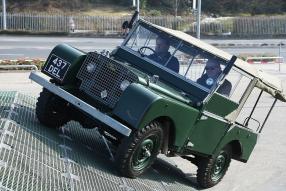 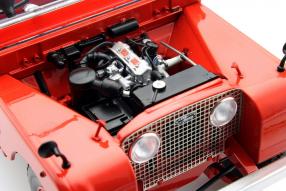 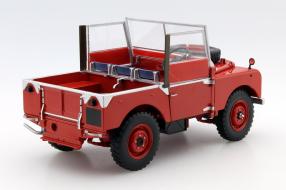 After a nerve-racking Formula 1 weekend we turn back, the deceleration enjoy in a way that could not be more rustic and serve you the Land Rover Series I in 1:18 scale. This model car it has already done on several occasions in the past program of Minichamps: Eight versions lists the site of Aachen Model car manufacturer. Thus, the small Land Rover is a model that is perfect for those is, which is looking for a manageable this criteria. The presented in red livery Model car like his brothers is characterized by an excellent finish of its many details. Among the positive characteristics include above all the removable soft top. The Series I celebrated in 1948 his debut; at a time when, to which the term SUV was not yet invented and nobody could imagine that a mother brings her child with such a car to school.

The Land Rover Series I named only with the introduction of its successor in 1958 as Series I and was originally designed for agriculture. The drive train, which was powered by a 1.6 liter four-cylinder, received power declines, could be coupled to the shafts of generators or wood splitter. A real workhorse, our Landy, and also in the model can be seen as such clearly. Minichamps decided on the use of die-cast zinc as the main material, which has made it possible to open doors and hoods. This enables us to benefit from a reproduction of the engine, the nothing to be desired lässt.Öffnet the collector hood, presented him Minichamps a detailed engine block with cylinder head, cooling water hoses and brake lines.

Bring really fun to look at the power source. The grille is a filigree wire mesh and perforated, so transparent. The metal structure of the end wall is modeled as real as the condition of hinges and brackets around to chassis. can be Inserted the side windows of the doors. The collector must not waive mirrors still on the correct replica of the minimum equipment of the fittings. But maybe that's what we like most: less is sometimes more. Dear watch a small four-cylinder in the Land Rover Series I, as a look at a panel of a V8. We wish you much fun with the produced only 504 units model and a good start to the week; perhaps with the beautiful video earlier in the article. And last, but not least: The ratings for Minichamps, top grade plus award.