On the 3rd of April, the F1 was launched this year in Bahrain. For the Hungarian Grand Prix four months later the first model car is ready in 1:43 scale. 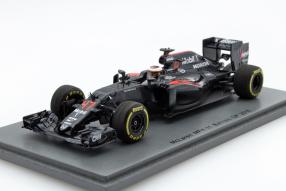 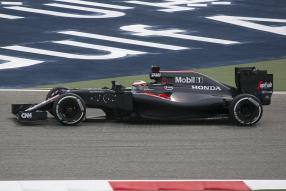 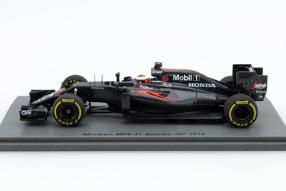 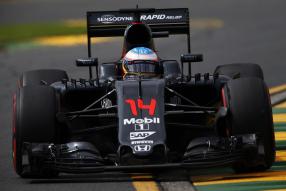 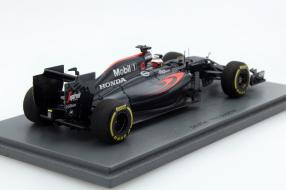 Spark is one of the fastest modelers,that the industry has to offer. This may be on the one handdue to the the fact that the team led by Hugo Ripert is dedicated body and soul to the world of motorsport; but then Resine favored the less expensive mold for the processing of polyurethane casting resin evenly also the time frame, the Spark for the preparation of a model car needed. Now - just before the Hungarian Grand Prix - the fans have the opportunity to take on another more recent car from the starting field of the 67th season of Formula 1 World Championship in the cabinet, or next to the chair. Looks up a race with a car as it is seen on the screen, not much more pleasant? does it not feel like you're in the middle of it all? We believe: Yes. And we look at the McLaren MP4-31 closely.

Schick and black looks the car manufacturer McLaren pairing and Honda. McLaren will continue to work with the Japanese automakers Honda and relates the motors from there. 57 rounds were back down on the 5.412 kilometers long track of the Bahrain International Circuit: At the end came the eingesprungene for injured McLaren's Fernando Alonso Stoffel Vandoorne - his name can be found on the model presented here car - on the 10th place finish and gained in his first Grand Prix ever directly also the first point. Nico Rosberg then won the race ahead of Kimi Raikkonen and Lewis Hamilton. Born on 26 March 1992, in the Belgian town of Kortrijk Vandoorne won the 2012 Eurocup Formula Renault 2.0. 2013 he raced in the Formula Renault 3.5 and was second overall.

In the years 2014 and 2015 he took up in the GP2 Series, which he won, 2015. 2016 he drives in the Super Formula and debuted in Formula 1 with McLaren-Honda. Certainly, the Belgians will appreciate the elegant, in the overall impression perfect matching with the model car model: A filigree replica of elaborately equipped with splinters front spoiler, of axle suspensions and telemetry antennas. As for the model, so McLaren and Honda have yet to detention: Mercedes-AMG is prior to the Hungarian Grand Prix with 332 points for the 1st place of the constructors' championship; McLaren-Honda with 32 meters far behind in 8th place. The consolidated is like not watch Honda long. With Ayrton Senna it was 1988, 1990 and 1991 world champion.

Responsible for the design of the prototype and thus indirectly for the model is Peter Prodromou. The car is based on the predecessor MP4-30 substantially. The MP4-31 is the 44th Formula 1 car company McLaren Racing. The Honda engine is called RA616H and gets its power from 1.6 liters, boosted by a turbocharger. The race drivers are Jenson Button and Fernando Alonso. The Hungarian Grand Prix is ??as usual RTL broadcast live and start on Sunday at 14:00.

We wish you a great race and a great weekend of sun, fun, games and excitement! Drive carefully, remains healthy and - until next week!