Whoever loves the legends surrounding the 24 Hours of Le Mans can not ignore the 1970 917. Four fantastic models and a great video. 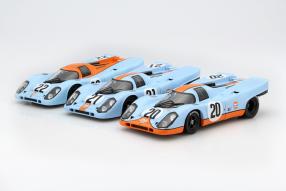 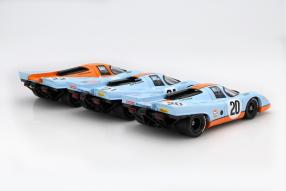 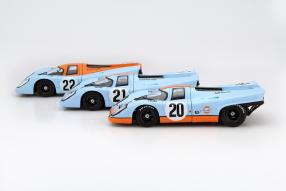 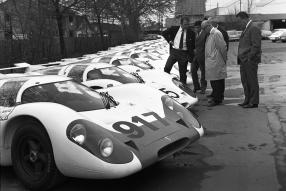 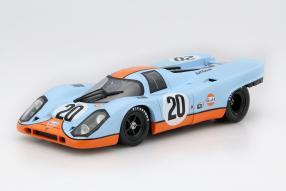 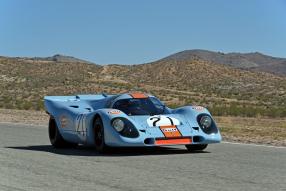 The Porsche 917 is more than just a race car. It is the basis of the myth Porsche at Le Mans. With the Porsche 917 K the Stuttgart sports car manufacturer first won the legendary 24 Hours of Le Mans, won there first overall victory. Moment, we have not recently read in this blog? However, since the small-series Label CMR recently brought a brilliant model car 1:43 scale for this model. But now it is the French from Norev that set the unforgettable race car a real monument. Or four. So, for a a set of three models with the start numbers 20, 21 and 22 and an obtainable only modelissimo and ck-modelcars.de special model of the Porsche 917 K Upgraded Version; all manufactured in 1:18 scale and made of die-cast zinc. Functional parts such as opening doors and hoods, there is not, but the collector will receive a high quality of workmanship and lots of details.

Yes, a few days is the presentation of the Porsche 917 already back. The race car was unveiled at the Geneva Motor Show and Accessories of the year 1969th Throughout its production period it should increase in many variants, win with short and long tail, as a coupe or an open Spyder race around the world and to performance. But first, a look at the beginning: Porsche discovered the World Sportscar Championship as activity for itself, after the international motor sports authority FIA up sat the capacity limit for sports prototypes from 3.0 to 5.0 liters and the required minimum number built production cars from 50 to 25 belittled. Porsche then could not be sure of being able to the required number of items sell well and went - driven by the then Director of Development - Ferdinand Piëch - the 917 is a high risk one.

Together with his engineer Horst Mezger Piëch managed to design 917 in less than one year and to build; although in the initial survey by the FIA ??all vehicles required for homologation were not roadworthy. When driving a twelve-cylinder engine should serve, center output. But the aerodynamics was lacking - until the collaboration with Team John Wyer Automotive Engineering should lead to solutions that resolve these issues in the second year of use of the 917th The engine was there with its 442 kW / 600 hp from the 4.5 enlarged to 4.9-liter displacement in its third stage. The peak power reached the positioned by a drive above the fan wheel and thus air-cooled engine at 8,400 rpm. Which brings us back in the models of Norev, since taking the role models of the 24-hour race in Le Mans in 1970 as a model that started John Wyer.

Norev Norev would not, if you do not also shaping the body of the Porsche 917 would have extremely carefully considered in Vaulx-en-Vaulin. The contours and lines, the air intakes, the overall appearance of the model is exactly the same with the models. The set of three includes model cars with the aforementioned start numbers which were driven by drivers Joseph "Jo" Siffert, Brian Redman, Pedro Rodriguez, Leo Kinnunen, David Hobbs and Mike Hailwood. The prototypical covered headlamps and the transparent-red tail lights are Modelling at the highest level, the paint without reason for complaint. The prints match the now usual, very high handling standard. At the rear of the collector can the Porsche 917 look something under the skirt, study the details of space frame and suspension. Perfect in its finishes in the interior - great compliment to Norev Porsche and licensors.

With this legendary video we wish you a nice, summery and happy weekend!