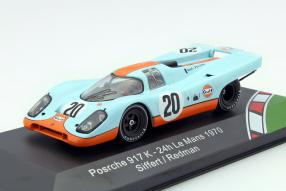 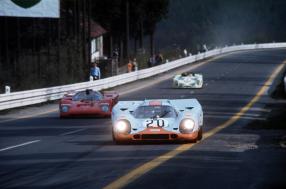 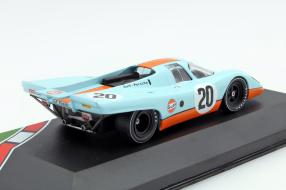 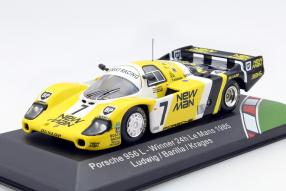 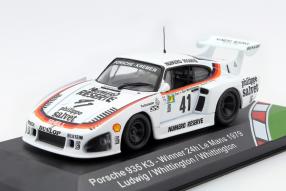 The pretty young (launched  about 9 monthes ago) model car Label CMR has delivered, with the miniatures in 1:18 scale, directly and immediately the very best work. Do you remember? We were simply delighted with the Mercedes-Benz W125 Streamliner and the MG EX 181, with which the small manufacturers has delivered compelling evidence of craftsmanship and successful model selection. With the Aston Martin V8 the Classicmodel Replicars continued this successful work earlier this year and again with the BMW 635 CSi in February. Now it goes on: The first car models in 1:43 scale go in their delivery and today celebrated premiere at modelissimo and ck-modelcars.de and present themselves at their best. There are: Porsche 956 L Winner 24 Hours of Le Mans 1985 Porsche 935 K3 Winner 24 Hours of Le Mans in 1979 and the Porsche 917 K Le Mans 1970th

The new releases of CMR in the first check

And what shall we say? First of all nothing, so speechless we are. Let  this sit a while: Premium model car resine plastic with carefully applied, detailed prints and naturally balanced proportions and a flawless appearance applicable celebrate famous models at a price that will knock you out. The dealer modelissimo and ck-modelcars.de require an incredible 19.95 euros per model. Given the details, for example, the Porsche 917 K distinguished from the 24 Hours of Le Mans, the same can only be described as a proverbial gift. A look the tubular frame structure at the rear of the replica of the exhaust system and the cockpit of the painted in Gulf colors racecar!

Your experienced top notch: A really successful debut for the so-called "1:43 racing edition" of CMR. The Porsche 917 K No. 20 went with the driver pairing Joseph "Jo" Siffert and Brian Redman at the start. The Swiss and the Englishman took the short-tail edition of 917 - hence the "K" in the name - for the British team John Wyer Automotive Engineering. The Porsche 917 experienced its debut at the Geneva Motor Show in 1969 and was powered by an air-cooled twelve-cylinder mid-engine. The first engines moved from a displacement of 4.5 liters, a power output of 383 kW / 520 hp at 8000 / min. With the 917 Porsche took 1970 first overall victory at Le Mans, which over the years has produced 17 should follow.

Popular and also at CMR a highlight

Years later Porsche parked at the top of the podium with the 956: Klaus Ludwig, Paolo Barilla and louis krages won in 1985 in Le Mans and put it on the 956 L of New Man Joest Racing. The number 7 has already been scaled down quite often, but the popular race car continues to sell well. Antennas, prints wheels by BBS and the interior of the cockpit are at CMR some of the best on the market. Also for 19.95 euros, mind you. In between - between the models of our models from 1970 and 1985 - won with the Porsche 935 K3 a race car, the 24 Hours of Le Mans, who looked even after production car and with one of the most fascinating and popular racers among fans.

The CMR also knew and decided to record the 1:43 scale model in the program. The small 935 forms the company car driver Klaus Ludwig, Don Whittington and Bill Whittington by wearing bib number 41 and we loved it. With a prototypical design of the hood, the radiator front in the front apron, the carefully retold headlights and the elaborate interior We can under item nos CMR43001, CMR43007 and CMR43005 - in the above listed order -these model cars available only certify that they have given the artisanal quality of finish in relation to the price that it takes to be the same legends as their role models. People, get them before they're gone! We wish you a nice weekend!