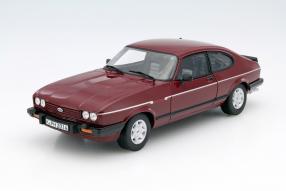 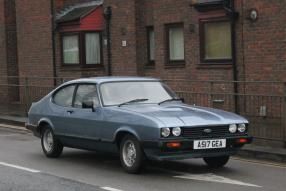 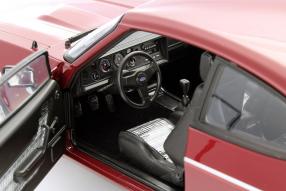 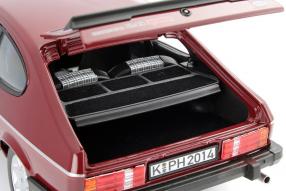 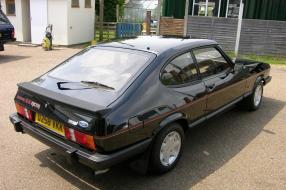 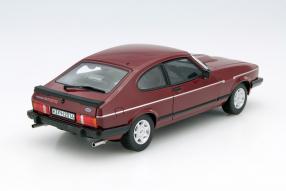 Somehow, it was all better before, right? The cars had more personality, more style, more chrome and bumpers fatter. Well, the bumper was certainly never a criterion for determining whether a car would be successful or not, but the classic cars are enjoying very reason of increasing importance because they recall times when cars have not been rundgelutschte Electronics Monsters recently also want to drive yet even. Better times experienced in the 1970s and 1980s, certainly the sports coupé of the major manufacturer of which has survived today to the VW Scirocco none. Unforgettable: The Opel Manta. But its competitor Ford Capri was on the wishlist of the guys at the time at the top.

At least for the model, because as good as the model cars are today, they were not yet at that time. But then a phone was also still - oh, not only the size of a phone booth, but basically the mobile telephony was the phone booth. Norev reduced with the wine-colored Ford Capri MK III 2.8i a really great role model in 1:18 scale, which knows how to impress with opening doors and hoods, a detailed engine and a meticulously modeled interiors. As the III reveals the name, it was the third edition of the Ford Capri, but nothing else was presented as one of the front engaging serious facelift 2nd generation and in March first time in 1978.

Responsible for all Capri-series Designer Uwe Bahnsen pulled the hood of the new dual headlights and drew a spoiler in the front, which the Capri can '78 actually look very different than the Capri II. This variant was produced until the end of Capri in December 1986, which also served as a prototype of our model. In 2.8i there was a sports version with mechanical K-Jetronic injection system. The 2.8-liter V6 developed 117 kW / 160 hp and a top speed of 210 kilometers per hour, but was initially only equipped with a four-speed transmission. This "injection Capri" Ford revived the interest in Capri, which was then built longer than originally planned.

Norev has recreated the essential components of the engine as usual vividly. We like it well, the meticulousness with which adopt the French downsizing of dream cars from this period. Spontaneously we must remember as well the BMW M1, which forms a highlight in each collection in 1:18 scale. Doors and hoods include the Capri just fed up with the die-cast zinc body on how the interior traces all details of the dashboard and seats. The tailgate provides a view on a lined boot besides rack. The seat covers and door inner panels are with plaid fabric pattern perfect replicas of taste of that time. We are left here to do one thing: to mark the model with a 1!

One question remains in the end

Why there is actually now no more Ford Capri, which could provide with close-cut body and a dash of sportiness in the genes as an ambassador for the brand that they can score again emotionally? A Ford GT is certainly something for the measuring and the super-rich, but on the road the desirability of vans and small cars is rather something that extends the boredom. Manta and Capri are for a period of laxity, which is long gone, but it does not remain when the auto bosses would rediscover instead of high and bustle of the electronics to the ends of the fun car. But that does not seem to be possible: Whether it's fun to be controlled autonomously with 50 kilometers per hour and to be a guest in your own car? Tip: Look at the great reportage that we have embedded above. Have fun.

The DTM 2016 starts at Hockenheim: As of Friday, 06 May,you can find our ck-modelcars trailer between grandstands North A and North B, bringing the latest model car DTM and many promotions with it. We are looking forward to seeing you!