The Macan is not new territory for fans of model cars, but new to this blog. We look at the model at the start of the new week. 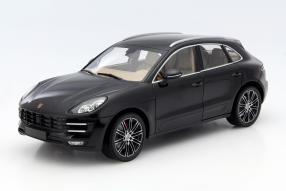 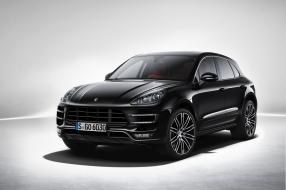 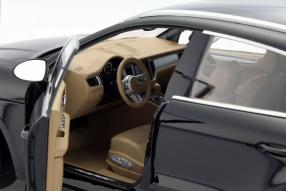 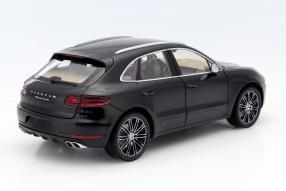 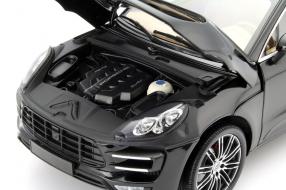 Good morning, friends of small and large model car! It's Monday and we start the new week with a new edition of a model from Minichamps because the prototype promises one thing on this gray morning: to sit above the traffic jams and thus well protected from the rigors of the rather wet spring and insulated from interference which one  so soon after getting up early on Monday just can not stand. sleep for two days and to be with loved ones at home together, and then back up to the office. If it's at least the summer would be ... but is slow in coming. We don't have to wait a long time, if we want to have a Porsche Macan Turbo 1:18 in our showcase in the new color Jet Black Metallic, because in this color Minichamps provides a new, limited edition of 504 units version of Diecast model at.

Under the item number 110062502 Aachener realize a color variant of the already presented in 2013 compact SUV, grows like their predecessors with around opening doors and hoods. The fact that the team led by Paul G. and Romy Lang have transferred the appearance of the model exactly to the model, is understood. To accomplish this, the fans for stately 129.95 euros a miniature with many features in the interior, we as part of this blog have not yet examined. Why not? There was the blog in 2013 simply is not, and thus the Macan for us in this area is new territory. Just as the Internet for other people. The finish of the body knows how to convince, because the hoods and doors are flush with the environment of zinc die cast from.

The headlights are distinguished the inner workings of the model to accurately, fog lights in the front apron elaborately reconstructed are also used transparent plastic separately. The Macan has unfortunately broken a massive grille, the Minichamps in all versions - ie as a grid durchsehbar - mimics, but at least with the necessary care in drafting the details. The model has a roof railing, but no glass sunroof. The rear lights and the glazing of the cabin also fit perfectly into the body. Well done are the replica of the 21-inch wheels with the label 911 Turbo design and the replica of the calipers, brake discs as well as the assembly of axles and driveline.

In the interior, the collectors will find a well-made instrument panel that has forgotten no instrument of the model. In the coloring of controls bothers us the pure silver replication of the switch for the electric seat adjustment. Since the footprint of the symbols of the model would have been appropriate. In the engine compartment, the cover of the 3.6-liter V6 that makes 294 kW / 400 hp to the road and maximum by means of 550 Newton meters (Nm) torque dominated the Macan Turbo accelerates to 100 kilometers per hour in 4.8 seconds. Top 266 kilometers per hour. To start lots of power so with such a model in the new week; We finish this check with a grade 2+ for the well-made model car and wish you all the best for the next days!