Just in time for the release of the movie 06.11.2015 more models are introduced to the market. German TV station RTL II shows &quot;Lost World&quot; 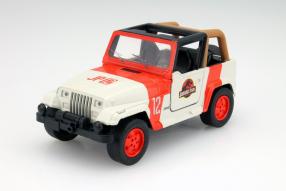 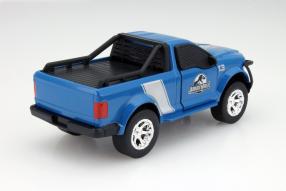 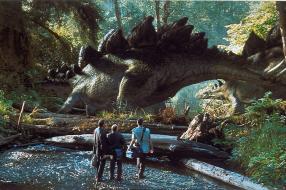 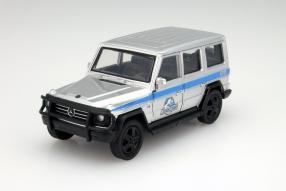 In mid-May 2015, we have already blogged about the modelcar of the Mercedes-Benz G 63 AMG 6x6, which was brought by the Californian label Jada Toys 1:24 scale in color and decoration along the lines of "Jurassic World"  , today we introduce you to another car, which has been licensed to the fourth  film of the series. We provide a brief overview of  the facts, that were puplished via the german TV network " RTL II" just a week before the start of the movie "Jurassic world" .


While the G 63 AMG 6x6 was kept in a more toylike size ( 1:24 ), Jada Toys has decided that the other miniatures would be available in the internationally most common collector size 1:43: along with two other ones from the "Jurassic World" series. Namely the Jeep Wrangler, item number 42508, Dodge  Rescue Truck (42509) and a conventional G-Class with the Dino-Park  logo (41262). Let's take a closer look at the models. They are more likely toys  than being able to meet the  collector standarts  for the showcase. The  miniatures draw the shapes and lines of the models quite well , but for 12,95 Euros they do not meet the standard that, Minichamps or  Norev shows.
The Jeep Wrangler features 2  rollcages and looks indestructible; the doors of the four-seater open , it doesn't have a copy of the eninge for that the hood does not open. The Dodge Rescue Truck  is a partly barred pickup with closed loading space and a martial cow catcher on the front; He also has working doors. Just like  the G-Class, which  Jada Toys modeled painted silver andbeen equipped with a blue stripe and the logo of the fictional amusement park. We believe that these 4 model cars would be suitable perfectly for completing a DVD collection. Also the "youngsters" would be happy about the new collection.

As mentioned in the beginning the commercial broadcaster RTL II has added " Lost World - Jurassic Park," to the program. The film is also based on a novel by the American best-selling author Michael Crichton, just like "Jurassic Park" (1993) He has also written the books that led to movies such as  "The 13th Warrior", "Sphere" or "timeline" .Crichton has also made himself known as a director. In the 1970s, the Crichton who died in 2008, staged the classic "Coma" and "Westworld". The main character in "The Lost World" was played by  Jeff Goldblum, who has already played the mathematician  Dr. Ian Malcolm in "Jurassic Park".With him well known actress Julian Moore and also Vince Vaughn who is better known for his comedian skills.


Born in Ohio in 1946, Steven Spielberg has been nominated 15 times for an Oscar, for "Schindler's List" and "Saving Private Ryan", he was allowed to take a total of 3 of the coveted trophies home. Spielberg has won several Emmys and Golden Globes; 175 prices and nominations, he won a total of 139 for his work. In the movie database imdb.com a total of 149 productions are listed, where he worked as a producer. And thats what "The Lost World - Jurassic Park" is about: On a remote island a group of scientists  want to study the behavior of dinosaurs . Everything goes according to plan, until hunters show up on the island and hunt down the Prehistoric Animals.