The warm weather is back. At least temporarily. How nice it would be, now to be able to enter into the model of a VW Bus T1, coming in 1:18. 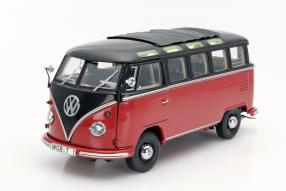 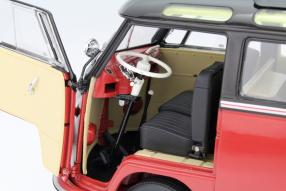 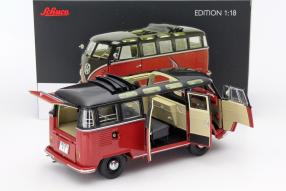 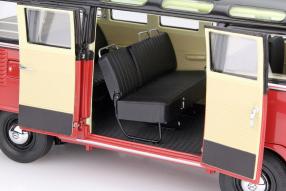 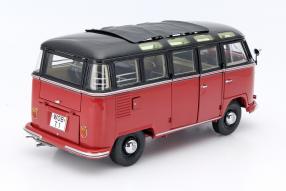 Yes, dear readers and followers, spring is here! 22 degrees in the sunshine have lifted the mood noticeably. As his loved ones and (!) The friends to be able to pack into the car to get to ride into the nature would be a beautiful thing, right? This is possible, of course, with a bus today, but whether a trip in the sunshine is as much fun as before, as a VW bus has been even glazed on all sides and called Samba? 1959 - the year in which Schuco has drawn the inspiration for his model of the VW T1 - T1 a success and reach the exit in the spring with the view by 23 window was a blast because the large folding roof plus for Cabriolet -feeling cared. To enjoy the fresh air to this extent, counted from 1951 to 1967 the program of Volkswagen.

Review: The Samba or Microbus Deluxe

In April 1951, a all so special model called vehicle called Samba or in English-speaking as Microbus Deluxe designated car saw the light of the car world. 23 windows, chrome hubcaps and brand emblems, all-round chrome strips for separating the two colors of two-tone paint and tube radio and said Faltschiebedach excluded from the Samba bus from standard Bully. Skylights and rear corner windows were made of 4 mm thick Plexiglas. Exactly these details Schuco has accurately transferred to the scale of 1:18, and created a model that does not miss any detail. Round, open all the doors; up to the tank flap. The roof is open and closed displayed.

The course provides a knotless insight into the standard specification of the model that simulates the in 1955 in the series acquired, through dashboard perfectly. The thin steering wheel, the small instruments that look of the dashboard and the seats throughout the interior fits perfectly. This statement can also be applied to the outer skin and the overall impression of the model car. Also compared to standard transporters larger rear window has not overlooked Schuco. The seats in the passenger compartment has a scale and detail faithfully reconstructed furniture; the handholds are a contrasting color from the seat. In the model captured well have the appearance of non-slip floor covering and the side panels in the interior.

A small motor, the struggle for security at the till August 1963 built corner windows, a replica of the chassis: All this is great! The door handles and outside opener inside, windscreen wipers, mirrors - again everything shines chrome and deceptive something over it that a Samba at the time was in fact not yet luxuriously appointed and equipped like a Multivan it can be today. But the feeling of freedom and adventure, love and air, of games, fun and excitement, which is found quite sure in the VW bus of today no longer again. But but it is more secure. But the play is not so important in 1:18 scale. Schuco: The You've done well, but you get the grade 1+, because no better way to make a model car.

Production of the prototype was a success

Only drive in the spring, he can not us unfortunately. But lighten the mood, which can under the item number 450028400 available and limited to 1,500 pieces Bus definitely. The model was in VW to generation change 1967 listing, but with the switch to the T2, there was no follow-Samba. The production figures were promising: In the first year 269 units were produced; 1959 were 6,241 copies; Last year the production even 18,790 special models. The price for this began in 1955 with 8,475 DM, which corresponds to a present-day purchasing power of about 20,900 euros. The model costs 174.95 euros; a real, well-preserved Samba is not going to get today under 50,000 euros and usually found only in the US.