Maserati has created with the Tipo 61 a unique race car, that CMC gets attention for the 1:18 scale model. Optional signature. 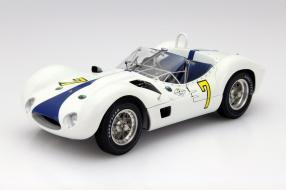 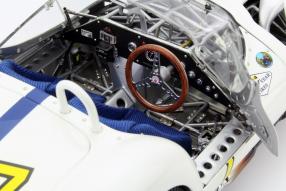 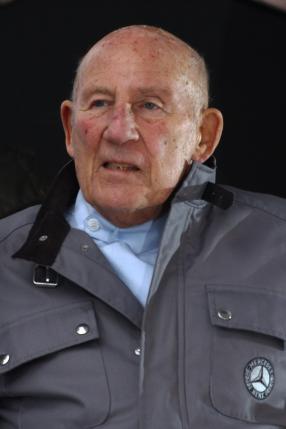 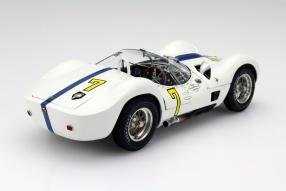 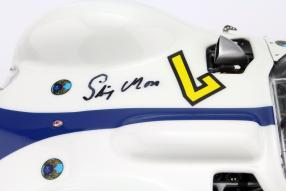 To get a model that is a limited edition of 500 pieces with the signature of Stirling Moss or to buy the edition, which is limited to 1,500 units and resemblesthe legend from 1960 bz its self- that is the decision that the supporters of the model car have to make for the Maserati Tipo 61 Birdcage 1:18. To contribute to the decision making, a glance at the price list, because with 599,95 euros the signed and rarer model is much more expensive than the listed with 349,95 Euro Standard Version. In both cases, the buyer will receive an exquisite model car of the so-called bird cage - the manufactured from more than 200 narrow tubes trellis frame - the legendary racing car reproduces exactly. Whoever opens the bonnet, experienced a Model Sensation.

CMC is known as a manufacturer of premium car models in 20 years. The finish and the quality of workmanship are in interaction with the detailing so good that we found already in yesterday's article for Ferrari 250 GTO, it no longer can mark because it is just too good compared to all other products. This also applies to the Tipo 61. As I said, just look under the hood: There you will find a replica of around 45 degrees to the side inclined four-cylinder engine, the cylinder head proudly bears the name Maserati. Intake, the fuel lines, coolant hoses, hose clamps, screws, nuts and heat shields - are more details it anywhere. The wiring of the engine with prototypical materials in just such colors; just great!

Birdcage is custom made in 1:18

Here CMC has also insisted to design the surface structures as the radiator or its hoses as close to reality as possible. The radiator cap is color-matched, best liked the hose clamps already mentioned. Sensational but also the finish of the space frame, said to have been so stable the prototype exactly as a monocoque, but less expensive to manufacture. This is hard to believe considering the large number of pipes to be welded together look at, the CMC has perfectly implemented in the scale 1:18. What is also not easy, because the mold for such a cage is not the collector as expenses underestimated. Therefore, CMC is a high-end label also perhaps the only true partner for reduction of such high standards alternate end Birdcage.

Facts and figures for model

From model incidentally exactly 22 pieces were made. The Maserati Tipo 60/61 was approved by the Officine Alfieri Maserati SpA built in Modena 1959-1961 for customers, because a business use in racing events were not due to the tense at this time the economic situation of the company. Tipo 60 was in 1959 at the start; Tipo 61 - the model for our model - 1960. The latter had (1,989 vs. 2,890 cc) to offer just under 3.0 liters a scarce liters more than the Type 60; the smaller version contributed 183 kW / 250 hp, the model to the model on the other hand 220 kW / 300 hp. The total length of up to 300 kilometers per hour fast, connected via five-speed transmission and 600 kilos predominant race car was 3.8 meters.

Stirling Moss was born on 17 September 1929 in London and launched 1951-1961 in Formula 1. With 4 vice world championships and 16 Grand Prix victories applies Moss as the most successful driver among those who never have been world champion. After an accident at Goodwood - then he joined the Glover Trophy, a national round of the Formula 1 - he ended his career, but may be in retrospect probably among the best racers of the century, which could deal with the wide range of vehicle types. Moss won during his career Formula 1 race in a Mercedes-Benz, Maserati, Vanwall, Cooper, Lotus and in a non-World Cup scoring run on Ferguson and numerous races in sports cars.

In Maserati Birdcage he won by Dan Gurney at the 1000 km race at the Nürburgring in 1960, and just at the GP Cuba the same year, which our model is dedicated. He was knighted by Queen Elizabeth II. as a Knight Bachelor in the peerage in 1999 and received the title of Sir. Moss had previously been appointed Officer of the Order of the British Empire (OBE). A very special man, therefore, who thus immortalized become quite the model car of CMC because it is connected with this legendary racing car on a special way. And: It is the oldest surviving GP winner of the world.

[25.02.2016] Renntransporter of Schuco for decorating collections