A dream coupé is what was once notaffordable for many of us, and now knows how to fascinate itself as a model in 1:18 scale. 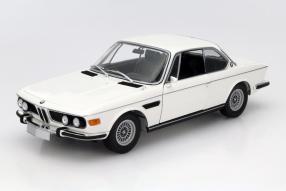 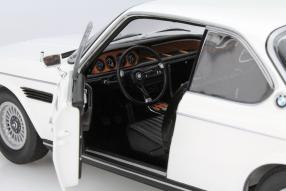 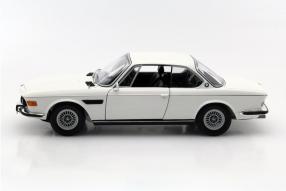 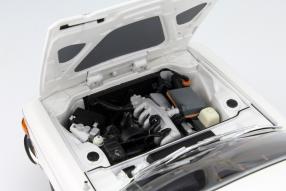 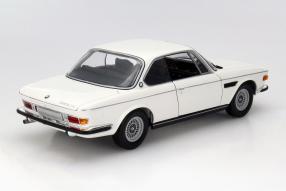 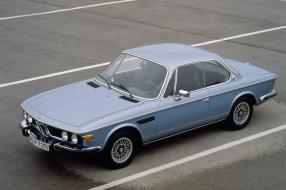 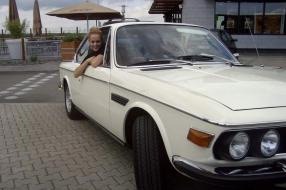 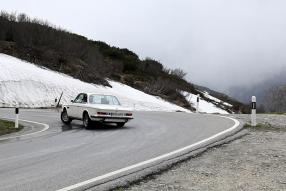 Minichamps seems his cooperation in the 100th anniversary of BMW AG have strengthened with the same, because not only the BMW M1 Procar racing series as well as their civilian variant, but also with a dream coupé from the 1970s gives us the Aachen modelers a high quality look back into the history of higher automobile-ability. The under item no 180029026 presented, limited to only 504 units miniature series E9 impressed us right away, because by opening doors and hoods a wide range of technologically attractive details to be known. The coupe produced between December 1968 and December 1975, built on a fee or contract from BMW Karmann in Rheine.

Overall - so show us the records - created 30 546 cars of the predecessor of the first 6-series. the coupes were Motorised exclusively with engines that developed from 2.5 to 3.2 liters of displacement outputs of 110 kW / 150 hp to 151 kW / 206 hp. In 1971, the deliverable exclusively with six-cylinder in-line engines of the type M30 coupe was also the basis for touring car racing, where there than 3.0 CSL enjoying success. The engines delivered a maximum torque of 211 Newton meters (Nm) from to 286 Nm. The prototype for our model came in the autumn of 1971 with Bosch D-Jetronic injection into the program, was identical to the BMW 3.0 CS and provides 147 kW / 200 hp. It accelerates in 7.7 seconds from 0 to 100 kilometers per hour. Top speed: Their 220th

By the time production stopped in November 1975 8.144 vehicles arose from a model of small E9, we look at in greater detail here. The comparison with the photos of BMW AG proves that Aachen have taken the proportions and the look of the erstwhile dream coupé perfect. As was the usual, the engines were far less dressed than they are today. For us this means that we can look forward to a number of technical details to us under the front hood, which does not offer us miniatures to current cars: the Ausaugtrakt for example, coolant hoses, the liquid container or the housing for the air filter element present themselves at E9 1:18 in a detail with which the collector receives a real added value.

The bonnet is forward was injured and held open by a delicate wire; Minichamps has thus demonstrated great attention to detail. What applies to the passenger compartment: As a living room seems the interior of the E9 to, because the numerous wood trim create a cozy feel-good atmosphere, provide security and let the interior appear more noble, than the cool carbon look today. Wood can be found on the instrument panel and the center console. Three-spoke steering wheel, the door panels, the window cranks, and the contours of the seats - everything catapults us back to a time in which the BMW 3.0 CSI was one of the dream car. 2 Used are currently on the Internet to have: Built in 1972 and 1974, 78,500 and 50,900 euros expensive.

Price differences in the used vehicle

Both are offered in Germany, went in Gold Metallic and Orange, with 51,000 and 2,500 kilometers both with new HU. The more expensive has gone more and is older, but is explicitly recognized as accidents; the cheaper but has been restored and certified by BMW Classic. Only 10 times it has the 3.0 CSI in Colorado, where Orange; He is in our view not only priced more interesting and certainly an alternative for those of you who want to buy a new 4 Coupé to treat yourself to something special. Which brings us back to the year 2010: The Techno Classica BMW launched the campaign of BMW Classic "joy never ends". On posters, in advertisements and movie clips BMW campaigned for its automobiles and motorcycles of the 1970s and 1980s.

The aim of the campaign was to make BMW Youngtimer a young, style-conscious audience to present an interesting alternative, and the power spectrum of the then-new BMW Classic Center around the restoration of BMW vintage and classic cars to the fore. Because - so our conclusion - to meet the present and past. As part of a viral film series BMW showed in 2010 entertaining and amusing the everyday practicality of the legendary BMW 3.0 CSI. Austrian presenter and actress Mirjam Weichselbraun and Matthias Malmedie, German moderator of the motor magazine "Grip" - - On her five-day trip to Munich from Marseille, the protagonists had different tasks around 3.0 CSI solve.

E9 is still in Gold

Fans of classic BMW cars, BMW Classic Complete Restorations, the supply of parts and remanufacturing of sale and purchase, vehicle, advice to buyers and a worldwide collection and delivery service. So you can well looked after things maintain the model, the Mini Champs has worked out so beautifully the model: the door mirrors with chrome housings and the wipers were reduced Loving with their black wiper blades. The corresponding period in the 1970s, the window frames and the bumpers are chrome - and still really fat. In the sum of its characteristics of small E9 meets in the middle of our collector's heart. In Gold Metallic Minichamps will also deliver him under 180029027 yet.