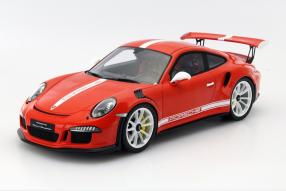 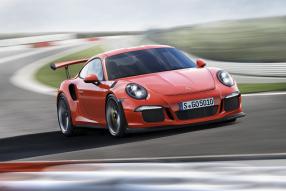 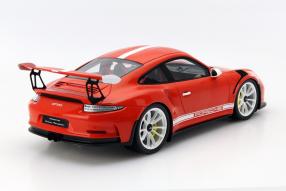 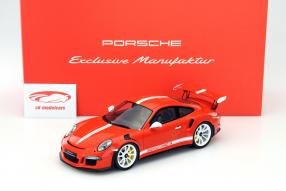 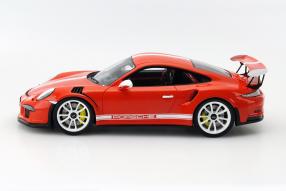 At the IAA 2015 a 1:43 scale model car of a Porsche 911/991 GT3 RS was created, which brought Porsche as a promotional model at the International Motor Show in Frankfurt in 1:43 scale. Now extends its manufacturer Spark in cooperation with the Stuttgart carmaker a highly detailed special model in a concise edition of only 300 pieces after that, however, is maintained in size 1:18. As was to be expected that shines under the item number for 449,95 Euro WAX02100012 be ordered model with an extremely good finish; produced in resine plastic doors remain closed while, but it makes up a fantastically beautiful, detailed interior. The based on the 991 / I GT3 RS falls on not only by the color Lava Orange, but also by the characteristic Radhausentlüftungen in the front fenders.

Special features of the 911 GT3 RS


The 911 GT3 RS is based on the 911 GT3, but modifications to the drive, aerodynamics and lightweight construction boost performance compared to the initial model clear: With a lap time of 7 minutes and 20 seconds exceeds the 911 GT3 RS on the Nürburgring Nordschleife even the best value of the Super Carrera GT sports car of just under 7 minutes and 29 seconds. For the nine-eleven has pulverized the historical success of the Carrera GT. Under the hood, and the panels including hides a 4.0 liter six-cylinder engine with 368 kW / 500 hp. Its maximum torque is 460 Newton-meters (Nm). The force transmits the 911 GT3 RS with a specially designed PDK transmission. The displacement naturally aspirated engine with largest and most powerful direct injection in the 911-family accelerates the sports car in 3.3 seconds from 0 to 100th

Just 10.9 seconds, he needed to achieve 200 kilometers per hour to be fast. The consumption in the NEDC combined is 12.7 liters per 100 kilometers. The roof is made of magnesium for the first time, engine and trunk lid made of carbon fiber and other lightweight components made of alternative materials. Using these high-tech of the RS weighs around 10 kilograms less than the 911 GT3; The lightweight roof also lowers the center of gravity of the stroller and thus improves the lateral dynamics.
A 30-cm-wide depression runs centrally over CFRP bonnet and magnesium roof; Spark has this important detail very well reproduced. Deepening cites the imprint in the trunk lid of the classic 911 models with air-cooled engine. At the same time it marks the two largest components of the light also has the widest standard tires of all nine-eleven in the 911 GT3 RS, to allow a more agile steering behavior and higher cornering speeds.

Top Finish in the interior

The interior design with the elements of Alcantara takes over the 911 GT3 RS from the base model, the current 911 GT3. New is primarily the full bucket seats, which are based on the carbon shells of the 918 Spyder. Standard and implemented by Spark extremely knowledgeable in the scale of 1:18 are the Clubsport package with bolted roll cage behind the front seats as well as the pre-fitting battery main switch and an indispensable for use on the racetrack Six point harness for the driver's side. We like very good sharpness of the contours of the bonnet, the ventilation grille and the finish, with the details of the interior and the brake system were transferred to the model. The 911 GT3 RS in this exclusive edition is expensive, but also an impressive model car of a fascinating role model; standard with a showcase.