Shortly before Christmas surprises Spark with new releases announcement to Le Mans in 2015 and the team of Minichamps supplies the Formula 1 world champion from. 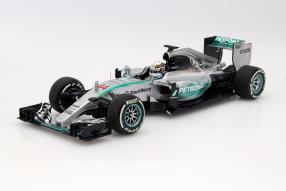 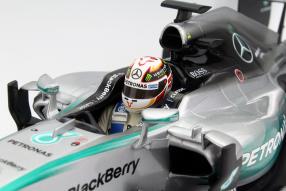 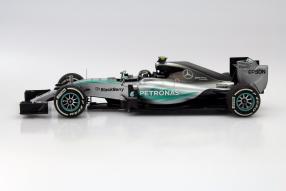 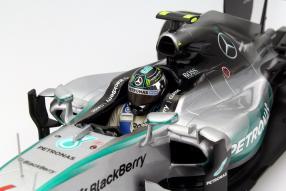 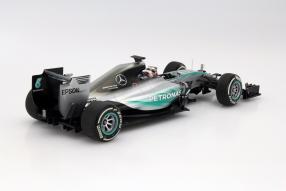 We bring like a Breaking News from Mercedes-AMG Petronas of the just ended Formula 1 season: The World Champion-car as well as the car of Vice-Champions Nico Rosberg is just in advertising package of model cars from the company group of Daimler AG at the Shops been delivered in the offices.

As always, ck-model cars for you this time was able to secure a number of copies of both blast. The official car of Lewis Hamilton you can get as Diecast model in 1:18 scale with the item number B66960539; B66960540 would be the number of the equivalent of Nico Rosberg. Both model cars are in terms of finish and attention to detail and quality of workmanship is simply what the collector presupposes a world champion: simply the best; true to the motto "The best or nothing"!

Exemplary the appearance of the model that cost 179.95 Eur and whose look fits to the last fugue to F1 W06. All air control blades and splinters of sculptural acting front spoiler, the filigree replica of suspension front and rear, the ultra-thin antennas on the formally correct transmitted in the 1:18 scale nose - everything looks top notch. The paint spotless; the prints as well.

The figures from the W06 will be great differ from W05: Consisting of 63 Parts with 150 decorations, including 35 Mask sprays, 22 Tampon prints 63 Decals 30 Free sprays as well. Especially the cockpit boasts a top equipment. Especially the game around the cockpit, side pods, the air inlet and the rear view mirror we like best. Applause for the work to Aachen!