Maisto vs. Norev - an unexpected challenger for the advertising model of the Mercedes-AMG GT has appeared in 1:18 scale. 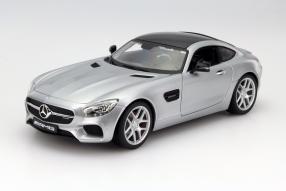 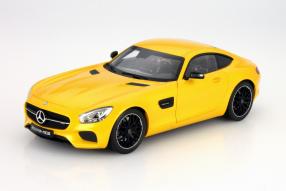 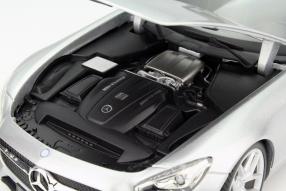 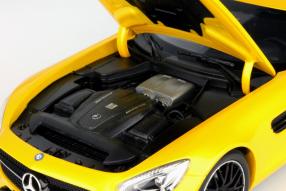 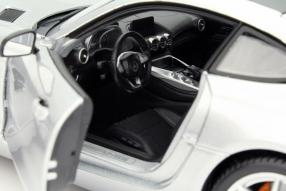 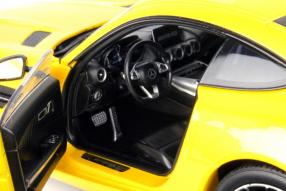 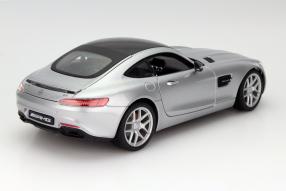 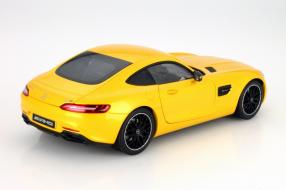 Mirror, mirror on the wall, who's the fairest of them all? You all know the famous question from the fairy tale "Snow White" in the mirror, which always put the queen in the 2nd place. Who is, comparing the model Mercedes-AMG GT S by Norev and from Maisto GT, the most beautiful or perhaps rather the best that we have to find out. Because there are now 2 model cars in 1:18 scale to the endeavor less to win the favor of the mirror, but rather the customer.

The Mercedes-AMG GT appeared as a model car from the production sites of the French from Norev first time to Paris Motor Show in 2014, as a promotional model and in limited numbers; a little later followed the series variants. These can be had for around 79.95 euros; The recently published first counterpart of Maisto costs EUR 34.95 with less than half.

Is half as expensive and half as bad?

Both the model form after the sports car, the Mercedes-AMG clearly opposes the Porsche 911th While the side view can be formally clearly mention which clientele is the focus, occupied the front of the GT that a front-mid-engine concept was implemented with him; The 911 also has a 991 rear engine. Norev has secured the first modelers license for reproduction of the C 190, as the Mercedes-AMG GT and GT S series is called internally.

Both - both Norev and Maisto - take the lines of the sports car perfectly; perfect perhaps, as when we say the other model cars. It is simply everything that appearance, proportions and finish of the gap dimensions and processing. But at the first viewing of the hammer: The challenger from Maisto - GT model - has a glass roof.

Details of the GT at a glance

By requiring the prototype surcharge glass roof, the model works naturally much more noble. And in the body of the Mercedes-AMG GT is directly the second highlight, because the spoiler in the tailgate to be opened can be extended. Also about features not more than twice as expensive Norev. Differences, for example, in the preparation of wheels, tires and brakes fall by no means as strong eye that the more expensive model can score.

Except for the fact that the GT of Maisto has a yellow calipers, so the model of the ceramic brake follows. In terms grille tie: Both have no perforated grill rack. The headlights are similarly well elaborated in both models. The border of the windscreen and the washer of the tailgate is properly blackened; Likewise, the exterior mirror housings in black clearcoat.

Which brings us to the question of equipment: Black Mirror, a black spoiler lip at the front and blackened exhaust pipe end pieces - which proves that the engineers of modellers have selected the AMG Exterior Night package. The chrome-colored clasp with star fits correctly as the picture. The door handles have taken both Norev and Maisto. When underbody Norev has worked better: Its layout is modeled in detail, as the appearance of the Maisto.

Inside, however, there are clear differences: The felt floor is missing by Maisto alltogether, the controls of the door panels are not provided with color, instruments such as air vents, pedals and steering wheel, however, are colored. The screen on the center console carries only the Norev an AMG lettering. The AMG lettering in the neck of the doors on the sill but is available for both models.

The rear lights are slightly reduced the fine Norev; instead of film for rear fog lamps, there are plastic. But these marginal differences are worth the investment of twice the purchase price? Yes, for those fans who collect perfection in their model car display case for condition. For those who enjoy a perfect exterior and put more emphasis on functional parts, for the Maisto is more, much more than clear enough.

The GGT from Maisto is not a cheap model! It looks with a glass roof and spoiler also been run out much better - in our opinion. The yellow, painted in SolarBeam advertising model is the Norev, the silver in iridium silver model from Maisto. But Maisto has a version GT S in SolarBeam.

A word to the engine

Oh, and what about the engine? The model is powered by a biturbo V8 with 4.0 liters of displacement, which is sold in 2 levels: with 340 kW / 462 hp in the GT or with 375 kW / 510 hp in the GT S. Even as Maisto scores with an extra Color; the hidden under the full fairing drive set is implemented here some prototypical. The hinges for the hood are the same coarse. So, mirror, who is the most beautiful C 190 in the country? Our judgment is: The by Maisto.

ck-model cars can be found at the Essen Motor Show in Hall 9.1 Stand 134