With the Essen Motor Show, many fans remember the race in the Eifel. Spark provides a first car model in 1:43 scale from it. 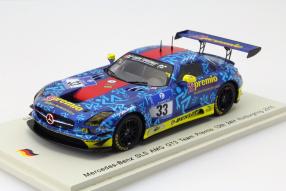 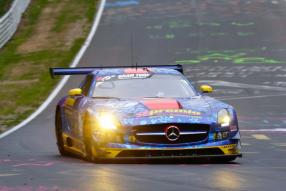 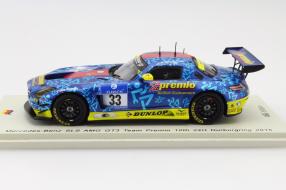 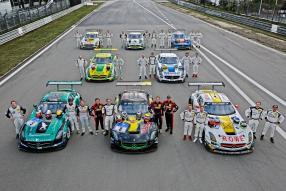 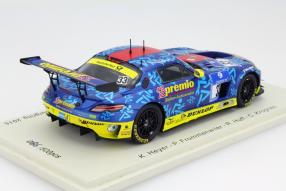 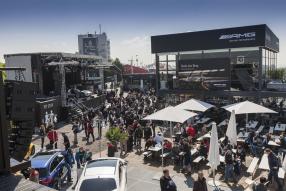 From 27 November to 06 December 2015, the Essen Motor Show is the address no. 1 for the fans of tuned cars, sports cars and motor racing. So that on this rich tradition major event, the cars will be shown that have been run successfully  this year on the various circuits in the world, the motorsport season 2015 is alive  at the exhibition and the many gasoline talks on again. As success is certainly to be considered when a racing car comes to the finish in 10th place out of a field of a total of 151 launched vehicles after 24 hours: This great performance the team Premio has done that his Mercedes-Benz SLS AMG GT3 with Kenneth Heyer drivers, Philipp Frommenwiler, Rob Huff and Christian Krognes sent under the starting number 33 on the hell ride of the 24 hour race Nürburgring 2015 through the Eifel.

Team Premio with a peak performance

The model of Spark commends this achievement and comes in time for the Essen Motor Show in trade, and can be found on the ck-model cars in Hall 9.1 Stand 134. The car model held 1:43 SLS AMG GT3 is limited to a scarce number of only 500 units and made of resine plastic. The composite of a German, a Swiss, an Englishman and a Norwegian team of drivers reached the finish line after 151 laps and took it 24: 05: 51.841 hours.

Converted the Mercedes-Benz came up with only 5 laps to the finish. The 118th lap was the fastest lap of the team, 8: 30.176 minutes showed the stopwatch. By comparison, the winner, the Audi R8 LMS of the latest edition, managed 8: 19.684 minutes in the 138th lap and ended the race after 156 laps total.

However, unlike the winner has the second-placed team with the SLS AMG GT3 MCG AG only a private team in the back, which is a highlight in a much brighter light the performance of 4 pilots and their allies. However, even these can not exist without sponsors: The workshop chain KW automotive service supported the team of Chef Hans-Peter Naundorf and was therefore part of a major premiere: the production of racing tires from Dunlop was relocated from the UK Birmingham to Hanau in Hessen. For the first time, therefore 24 hour race at the Nürburgring were used in the GT class racing tires Made in Germany at. The car itself is but been known: The Mercedes-Benz SLS AMG GT3 brings out 6,208 liters and at 7,300 rpm 405 kW / 550 hp.

An old acquaintance  in motorsport, which is from 0 to 100 kilometers per hour takes just 3.8 seconds, and depending on the translation of more than 300 kilometers per hour. The front mid-engine guarantees optimum weight distribution with a low center of gravity; incidentally connected with a six-speed racing transmission with sequential shift. A combination that helped on Saturday the race gone from 30th place team, even in the difficult conditions on Saturday night to keep their nerve.

With a very solid driving the quartet continuously struggled forward and drove his race Gullwing successfully finish. These Philipp Frommenwiler: "Our SLS AMG GT3 has worked absolutely flawlessly, there was not the slightest problem we 4 drivers drove for the first time together in a team, so that's in this tough race a huge success.."

The whole team did a perfect job, now being celebrated, so the Swiss after the race. And the fans of the Nürburgring 24 Hours in 2015 can celebrate, where they pick up the successful model of the Team Premio home. Spark offers the perfect in appearance car model for 59,95 Euro: The team led by Hugo Ripert has implemented very well the intricate details in the scale of 1:43.

The wafer-thin stand of the rear wing, the small splinters left and right of the front apron, the antennas for telemetry on the roof and the knowledgeable simulated headlamps, together with interior life again demonstrate the high skill of the team at Spark. At the 24-hour race Nürburgring 2015, another SLS AMG GT3 took part; we look forward to on the model car.