It is a really nice Throwback Thursday, when the editorial team can look back on modelcars to the topic Porsche 993 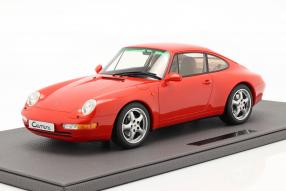 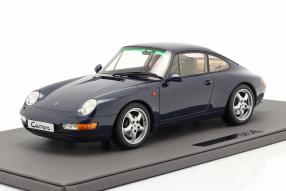 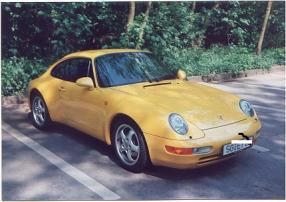 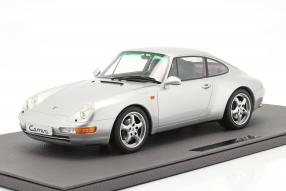 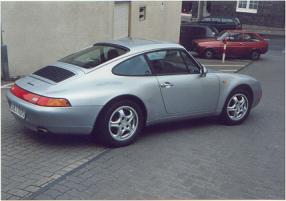 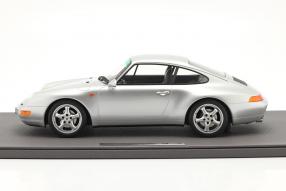 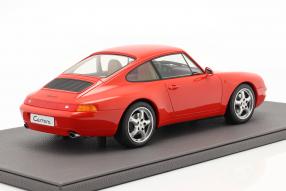 Yes, this review is an especially beautiful throwback, the team of ck-modelcars.de is looking on the probably most beautiful nine-eleven that ever existed, on the occasion of the delivery of five new modelcars in scale 1:12: The Porsche 911 of the model series 993. What a sensation this car was! Not only because the successor to the 964, produced from 1993 to 1998, came onto the market as the last 911 with air cooling, but because designer Harm Lagaay gave the vehicle a particularly harmonious exterior. This brought about a real change in the lines of the classic: the bumpers were more fluidly integrated into the body and the rear fenders do not appear oversized despite their width. With these models, the small series label Top Marques has closed a gap in its range of this size.

Regular guests, friends and customers of the webshop and the blog know about the trend, where the manufacturers constantly extend their portfolio of modelcars in scale 1:12. It is not just about racing models such as the BMW M1 or Ford GT40, but above all miniatures for the Porsche 911 Turbo 930 and other series of the car manufacturer from Stuttgart that are fueling this trend. With the Porsche of the generation 993, Top Marques has provided the basis for a sensible expansion of this range and in doing so has worked out the peculiarities of the model in a technically excellent manner: The front section could be drawn flatter compared to its predecessors, which was technically achieved through the use of the new polyellipsoid headlights. It was a completely new Porsche feeling conveyed by the 993, which was supposed to save the future of Porsche.

Because things didn't look so good back then: sales fell sharply at the end of the 1980s; also with the 944 and the 928 designed as the successor to the Porsche 911. So it was the right decision to follow the new path in the design of the 911, which was available as a rear-wheel drive and all-wheel drive; easy to recognize on the front, because the indicators on the two-wheel-drive basic version remained orange; with four-wheel-drive they remained white. Top Marques has also taken this point into account. Just as the mold makers have perfectly matched the round, flowing lines of the 993. The miniatures with their length of around 36 centimeters are made of high-quality polyurethane cast resin. For comparison: at a scale of 1:18 it would be around 24 centimeters; in 1:43 just under ten centimeters. As is usual with resin models, doors and hoods remain closed in the case of these new releases.

Thus, the fans can not experience a replica of the engine, which appeared to the launch of the model series 992: A 3.6 liter six-cylinder boxer-engine with 200 kW / 272 hp at a maximum torque of 330 Newton meters (Nm); shifted via a six-speed transmission or four-speed tiptronic. It accelerated to 100 kilometers per hour in 5.6 seconds; 270 kp/h were the top speed. Despite the lack of functional parts, the model cars offer a good view of the interior thanks to the generous glazing. Due to the size, the dashboard with the five round instruments, the center console and the seating are transferred to the models much more thoroughly than in the case of smaller miniatures. So if you already have modelcars in format 1:12, you will share our assessment that it is a great Throwback Thursday.

Here: Click to the Porsche modelcars from TopMarques and other 1:12 models