GMP presents yellow painted modelcars in a strictly limited unit as well as from diecast: Here an insight on miniatures and role model 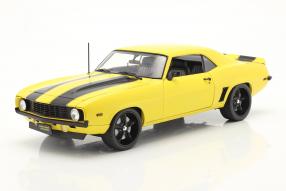 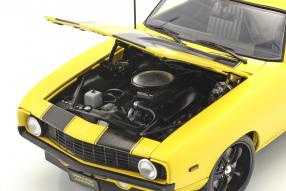 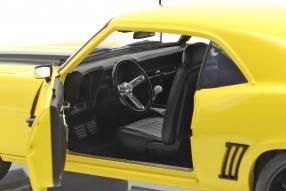 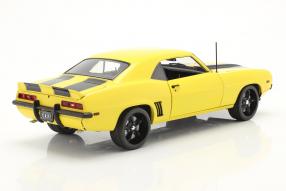 Small coupes with big engines - that was the outstanding property of the so-called pony-cars, which owed this general prodcut name to the Ford Mustang. The Chevrolet Camaro for which the label GMP delivered the modelcars in scale 1:18 of the vintage 1969 also adressed the fans of this trendsetter. It is specifically about the Chevrolet Camaro Z/28 "Yellow Jacket", which comes with openable doors and hoods and thus built from diecast to the collector; available under item number A1805719. Its numbers of pieces is limited to 804 units. These models have a true to detail interior and steerable front wheels, but the most important point of the strictly limited version is the exact replica of the engine compartment: Let us take a closer look at these miniatures!

The fun begins already with the opening of front hood and the view on the hinges, which are clearly superior to the inexpensive modelcars. Authentic and space-saving, they give the hood a stable hold so that you can study the eight-cylinder underneath. It is not just the engine and its cylinder heads that deserve our attention, but also the design of the auxiliary units, brake booster, cooling water hoses and ignition cables. The V8 engines of the Z/28 had a displacement of 4.9 liters and developed 216 kW / 290 hp. They were shifted with a four-speed sliding gear, the gear lever of which came from Hurst Performance. GMP replicates these knowledge-rich; just like the houndstooth pattern of the seat covers in the prototypical interior, which is mostly black in the model.

Black are also the decorative stripes over engine hood and tailgate, while the body is painted in butternut yellow. As always, GMP got it well to replicate the line management of the role model. The appearance of the modelcars matches correctly when viewed from the outside as from the inside; also the details of the radiator grille surrounding, which is color-matched with the exterior paint, and the black grill grille on the Z/28. Well-preserved Chevrolet Camaro Z/28 from 1969 are rare on the used car market. At the time of this article's publication, two copies are available in Germany at a price of EUR 54,900.00 and EUR 68,500.00 each; both accident-free according to the seller, with 94,647 and 70,000 kilometers on the clock and TÜV until June 2022. The miniatures: Also checked but naturally cheaper than the models.