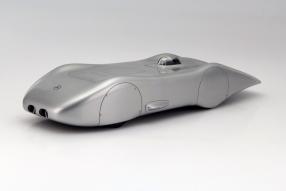 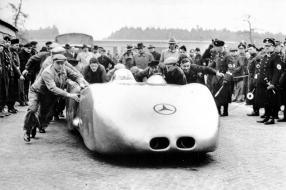 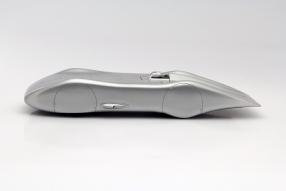 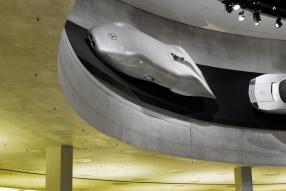 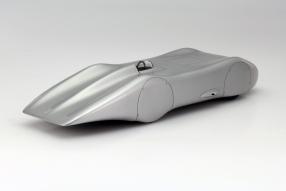 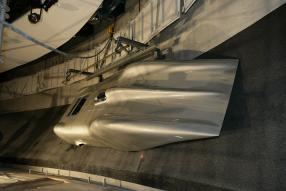 Every day we introduce you to a new model car. But it is not every day that we introduce the first model of a completely new label. CMR - Classic Model Replicars - takes to offer top quality miniatures by classical models at fair prices in top quality. Her debut celebrates the brand with a car from the past, which in its way is still a hot topic today: The January 28, 1938 by Rudolf Caracciola in the Mercedes-Benz W125 established in streamlining record is still unmatched. The prototype managed on the Frankfurt-Darmstadt motorway over a distance of 1km with flying start 432.7 km per hour than the average speed of a return trip. No one has since has been traveling faster on a public road. In this respect, the car is still current scale today.

The Record car in Mercedes-Benz-Museum

How is a record run put together?


It also set with 432.36 km / h the existing record for the flying mile. The values are obtained as the average of 2 runs in opposite directions. For these high-speed driving of the Mercedes-Benz W125 record car carries an aerodynamically optimized body. Streamlined cars are not uncommon in those days: Mercedes-Benz put them in circuit racing competitions successfully.

The based on the most triumphant Silver Arrow W125 record car not only received a specially refined twelve-cylinder engine with 2 compressors, but also a flat, fully enclosed body with a wedge-shaped tail leaking for record attempts in January 1938th The engineers lowered the wind resistance to a sensational drag coefficient of 0.157.


736 PS for the record for an eternity

It also includes a radically reduced-air intake on the front. So the record car breathes through 2 small openings getting merely amount of air / 3 uses the 5.6-liter V12 engine of the type MD 25 DAB to work. His performance gives Mercedes-Benz with 541 kW / 736 hp. The engine cooling on the other hand does not need any fresh air, the cooler is instead surrounded by a filled with 500 liters of ice and water tank. Of this we see in the beautiful model anything because as usual in models resine plastic, doors and hoods are closed. For those who do not know yet: The polyurethane casting resin is lower demands on the mold and is suitable for the recreations of bodies that are blessed with strong curves, quite excellent. So also the premiere model of CMR, which has the following number CMR001.

The model and its prototype

A first comparison between the model car and the Prototype shows that the mold maker from CMR have already done a great job in his debut. The proportions of the car from 1938 were transferred perfectly to the model from 2015, the engineers. The appearance of the model coincides perfectly with that of the original, which has fortunately survived the turmoil of World War II. In this respect, even our critical eyes can see nothing else to attest impeccable work as the creators of CMR.

That leaves you wanting more models from this source, which have already been announced. Perhaps taking a Michael Bock with his new desk: Bock - the line of sports and lifestyle marketing at Mercedes-Benz takes over from the December 01 - Head of Mercedes-Benz Classic Customer Center and. His successor is the former Chairman and CEO of Mercedes-Benz Accessories GmbH, Christian Boucke.