A cooperation with a cigarette brand led to one of the most legendary designs that ever went to the start in the DTM. Here: New modelcars in 1:18 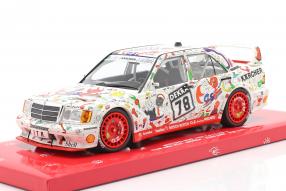 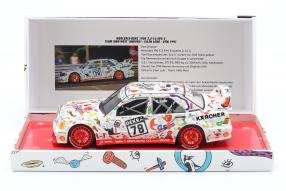 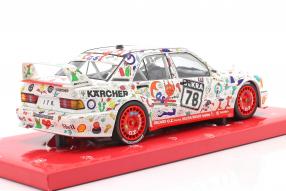 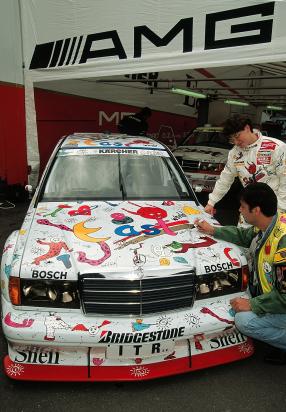 Take a deep breath is the order: For the fans who in the years immediately after 1992 were not lucky enough to get modelcars based on the role model of the Mercedes-Benz 2.5-16 Evo II, which entered the DTM with the starting number 78 and went to the start of the race with Ellen Lohr at the wheel in 1991 for the AMG Motorenbau GmbH team. This vehicle corresponded to its colleagues in almost every detail, but with its paintwork it was more noticeable than the vehicles in the look of Diebels or Jet. Lohr's racing car was designed by the Berlin artist Andora in the style of Pop Art. Their motives are taken from everyday culture, the world of consumption, the mass media and advertising, with the representation in photo-realistic and mostly oversized images. A real eye-catcher for the showcases of fans of Mercedes-Benz and the DTM, now available in a new edition.

The painting of the racing car was created in cooperation between the Hamburger Reemtsma AG and the artist Andora from East-Berlin, civil Andreas Hoge. The painter, who was expatriated from the GDR in 1980, painted a.o. shoes that show master Alfred Biolek discovered and that Andora promoted from then on. The first modelcars of the spectacularly designed Mercedes-Benz 190 E 2.5-16 Evo II came to collectors in a valuable hinged box and in a strictly limited edition in scale 1:43, with the same motives on the outside: The models were sold out very quickly and were on stock exchanges at the time traded up to DM 700. Today they can be found online for around 100 euros. The models currently launched by Minichamps under item number 155913687 are slightly higher in price: 999 pieces are available.

These, however, are in the scale of 1:18, thus larger than the original versions by Andora. However, Minichamps has remained true to tradition and spent these new miniatures an elegant packaging in the style of their time as well; both the base plate and the outer packaging have Andora motives. To date, no other car has achieved more victories, more points, more best times in practice, more fastest laps and more kilometers in the lead than the Mercedes-Benz 190 E 2.5-16 developed by AMG in its second evolutionary stage, which is known for short as Evo II. In line with the current trend for models in format 1:18 from motorsport, Minichamps has decided not to include functional parts with the models. This is not at the expense of the appearance: They correspond exactly to their models in terms of shape and lines.

The Mercedes-Benz 190 E 2.5-16 Evo II was equipped with a four-cylinder and cylinder head by Cosworth, which developed 272 kW / 370 hp thanks to its four-valve technology. Because the developers looked at the weight in view of the use in the DTM, the racing version weighed only 980 kilograms. The acceleration from zero to 100 kilometers per hour is given with 4.5 seconds. All newly launched modelcars of this type weigh around 1,100 grams and are of the very highest quality, a must have for every fan: The antennas on the roof, the display of the dashboard, the roll bar, the separately attached door handles, the filigree exterior mirrors and the perforated brake discs are implemented at a top level. Andora can be proud of the fact that the work of art he created around 30 years ago has survived in this form over the decades.