After the modelcars from Kyosho in scale 1:12 made of resin, the finest hour of the rotary engine is now included in the CMR range from diecast 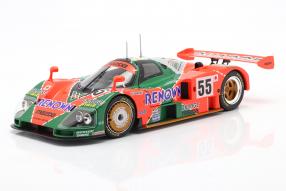 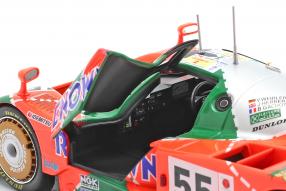 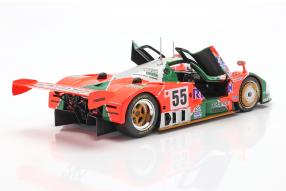 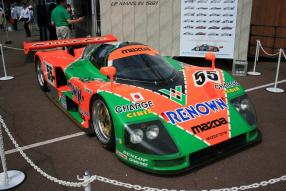 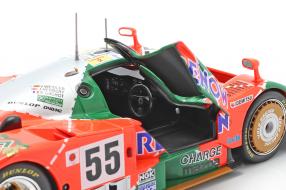 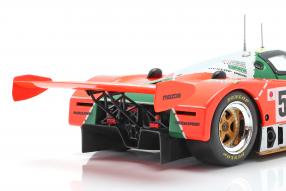 CMR suprises with affordable miniatures of the first and only winner of the 24 Hours of Le Mans with a rotary piston engine in scale 1:18, built from diecast and with openable doors: At the 59th version of the 24 Hours of Le Mans, the Madza 787B won with the drivers Volker Weidler, Johnny Herbert and Bertrand Gachot, who competed for the team Mazdaspeed Co. Ltd. The label CMR, known for its high-quality diecast modelcars, commemorates this great success with the models available under item number CMR175, which was and will probably remain unique in terms of the drive plant of the winning car: The 787B was the first winner to feature a rotary piston engine, the so-called Wankel engine. We go back to its details and look at the models with this article.

Mazdaspeed brought a total of three Mazda 787Bs to the racetrack at the Sarthe and relied on the power of their 2.6 liter rotary engine. The statements made by colleagues in the trade press show that these engines were considered to be fuel-efficient, but that they were a burden for the pilots due to the extreme volume of the rotary piston engine. Significant advantages over a reciprocating engine: The Wankel engine has fewer moving parts, requires less space and is therefore lower in weight. An unfavorably shaped combustion chamber and longer sealing surfaces are among the greatest disadvantages of this concept invented by Felix Wankel, which was particularly popular with the NSU Ro80, but had deficits in terms of durability. Mazda also dedicated itself to this drive concept, but did not really use the Le Mans victory to market it.

The 59th Grand Prix d’Endurance les 24 Heures du Mans was held on June 22nd to 23rd, 1991, on the Circuit des 24 Heures. It seemed as if Mercedes-Benz would bring home victory in this fourth round of the 1991 sports car world championship. On Sunday morning, however, a defective underbody and problems with the gearbox caused problems for two of the cars with the star. The third Mercedes-Benz C11 suffered engine damage three hours before the end. This cleared the way for the Mazda from Herbert, Weidler and Gachot. Of the 46 cars registered, 38 started and twelve were classified. Mazda won in front of around 250,000 fans after driving 4922.81 kilometers with an average speed of 205.333. It was the first victory for a Japanese designer at Le Mans. Herbert missed the award ceremony because of his exhaustion.

The fastest lap was driven by a Mercedes-Benz C11 with 3,35.564 minutes and 227.125 kilometers per hour, by the way a, a certain Michael Schumacher. CMR is well known among the collectors since the debut of the brand in November 15th, 2015, - soon the fifth birthday is coming up - for miniatures of striking role models from the motorsport; almost exclusively specialized on diecast. The Mazda in 1:18 corresponds to the lines of the model right down to the last joint and impresses with its excellent workmanship. The fact that the doors to the cockpit can also be opened with this model is a feature that many providers are now saving for profit reasons. From the headlights to the taillights under the huge spoiler, there is nothing in these miniatures, despite the price, to indicate that it is a budget issue.