Numerous modelcars in scale 1:18 enrich the range since last week: A popular cinema start is among the modelcars 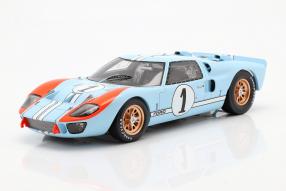 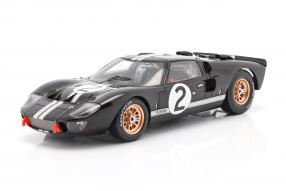 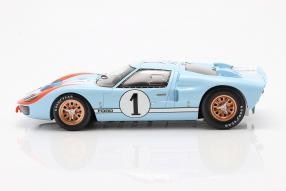 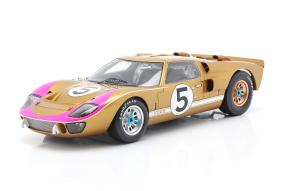 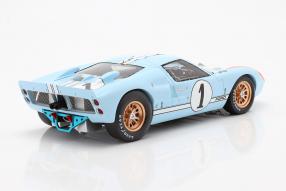 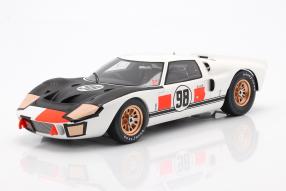 Next weekend, on September 19th and 20th, 2020, the time has finally come: The 88th version of the 24 Hours of Le Mans were justified in the pandemic and has been postponed from the summer to next weekend. In its delivery of last week's innovations, the company Spark has dedicated itself to a participant from the history of the endurance race, which has already been a guest at this point several times, but who is extremely popular with fans: The Ford GT40 appeared in three new variants; reduced by Spark into the scale 1:18. Razor sharp replicated modelcars, brilliant in the colors and perfect in the reproduction of the line management, that are real highlights among the collectibles, which presumably also captured the hearts of the audience through the movie “Le Mans - Against Every Chance”.

Three modelcars - one story: With the new miniatures of the Ford GT40 with starting number 1, 2 and 5, Spark fades back to the 24 Hours of Le Mans of the year 1966. A year that focuses on the competition between the two car manufacturers Ford and Ferrari at the 34th Grand Prix d'Endurance les 24 Heures du Mans from June 18th - 19th, 1966 on the Circuit des 24 Heures. The scale 1:18 models with the item numbers 18S515, 18LM66 and 18S516 with the starting numbers mentioned above are made from high quality polyurethane cast resin, as is customary at Spark. In keeping with the appearance of its role model, Spark also recreates the winning car: racing driver Bruce McLaren and Chris Amon at the wheel of starting number 2 gave the Shelby American Inc. team the overall victory. But the winner of the hearts was No. 1.

McLaren and Amon were scored as the first place in the black GT40 by Shelby American Inc. with the starting number 2; their car had started about 36.6 meters behind the car with No. 1: The longer distance made Ken Miles one of the most unlucky second in Le Mans. Ronnie Bucknum and Dick Hutcherson on 5 from Holman & Moody followed in third place at the finish. The potential of the 7.0 liter V8 had shown itself in the way Henry Ford II had wished: to beat Ferrari on the doorstep in Europe. Before that, by the way, the preparation not only on the test track, but also in the race: The participation of the Ford GT40 with the starting number 98 in the 24 Hours of Daytona in February before Le Mans 1966, for which Spark delivers also the matching modelcars under the designation 18DA66 and in 1:18.

The night is long in Le Mans, but in 2020 it will be a bit longer: In mid-June, around the summer solstice of June 20th, the days are the longest in the northern hemisphere. On the originally planned date of this year's long distance race at the Sarthe, the cars would have driven 8:02 hours through the night. On the new September date, the sun sets at 8:02 p.m. on Saturday evening. The first sunbeams will be seen on Sunday morning at 7:44 a.m. - thus the phase of darkness is almost four hours longer than just before the start of the calendar summer! The teams will see daylight for about 12 hours at the fight two times around the clock on the Circuit des 24 Heures. This promises additional tension on the screens at home and we are going to set the focus on Le Mans this week.