Somewhat aged, the role model to the modelcars in scale 1:18, but still as seductive as delightful in the lines: Three novelties from diecast 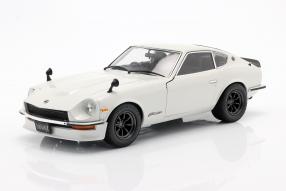 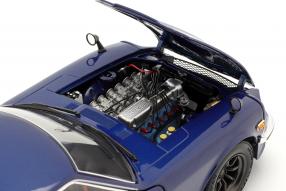 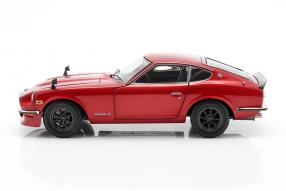 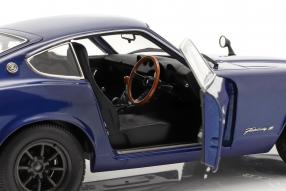 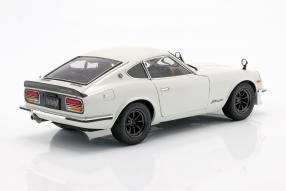 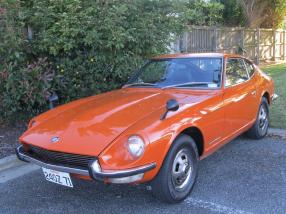 Is there something more beautiful than to start into the weekend with a lady? That's what the editors asked and made the Nissan Fairlady Z just the right car for it. Kyosho has released new modelcars to this popular role model to the trade. Fairlady, that was the name in which the two-door sports coupé came onto the Japanese market; named Datsun 240Z in export. The two-seater with the body shape of a station wagon coupe celebrated its premiere at the Tokyo Motor Show in 1969; According to the Kyosho label, the diecast miniatures reproduce the model year 1970. They appear in three colors: under the item number 08220BL in blue, with the 08220RM in red and in white under the 08220WP. What they all have in common is that their doors and hoods can be opened. The finish of the metallic surfaces is terrific!

That's not surprising, because the label Kyosho is well known for its unique produced modelcars for many years: Small gaps in miniatures based on current models and a corresponding look in the models of young and oldtimers. In both cases, the glazing, headlights and taillights nestle perfectly into the die-cast zinc body. Holding a Kyosho model in your hand is always like holding a small gemstone, a work of art that not only matches the lines of the role models in its appearance, but also sets accents in terms of its feel. At best, Autoart can keep up. The modelcars of the Nissan Fairlady correspond exactly to this image: the narrow chrome bumpers, the Talbot mirrors on the front fenders and the radiator grille correspond exactly to the prototype.

The chrome-plated frames of the windows as well as the multi-colored, transparent taillights, the black spoiler lip on the tailgate - everything is of high quality. The interior is presented in a sporty black; It looks noble thanks to the classic wooden steering wheel. The models reproduce the right-hand drive; the way it was sold in Japan. And it was there - not abroad - that the Fairlady Z was delivered with a 2.0 liter six-cylinder under the bonnet: 93 kW / 126 hp. The original model was exported in 1970 with the 2.4 liter version under the hood, which developed 112 kW / 153 hp. And as with the modelcars from Autoart, the replica of the drive plant is an absolute highlight in these models from Kyosho: the cylinder head, intake manifold, spark plug connector and the spark plug wiring are a dream in 1:18!

Batterie and liquid reservoir should not be missing either and are also top! And all this behind an open - so as a real grid - radiator grille as well as under the attached hood in the front. What the collector is offered with these modelcars is mega! The trunk is almost a minor matter, but this part of the model is also modeled in great detail, with panels and a tailgate that swings high. So, did the editors convince you? Not with around 180 things - the top speed of the Fairlady Z - but to start the weekend with these little cars: A diecast lady, but one whose finish and story hit the heart!

Here: Click to the modelcars of the Nissan Fairlady Z