Spark brings miniatures, limited to 222 pieces, of the Porsche 911 GT3 R from GPX Racing in a dirty race version in scale 1:43 exclusively at ck-modelcars.de 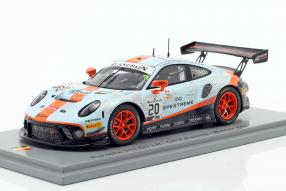 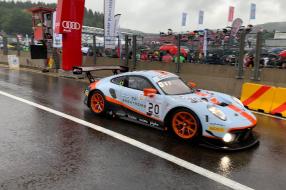 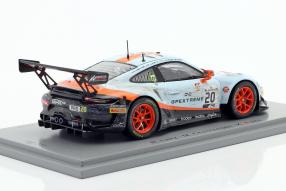 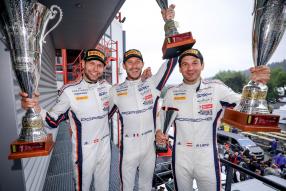 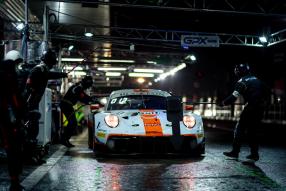 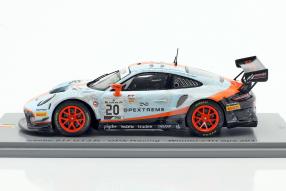 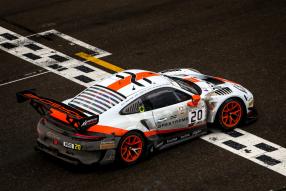 With these modelcars by Spark, we can look back on July 27th and 28th, 2019, so pretty much a year: Exclusively available at ck-modelcars.de are the miniatures of the Porsche 911 GT3 R with which GPX Racing won the 24-Hours-race of Spa-Franchorchmaps last year, the 71st edition of the traditional race, the fourth run of the Blancpain GT Series Endurance Cup of the year. The over 367 kW / 500 hp strong Porsche with the starting number 20 was driven by the pilots Michael Christensen from Denmark, Kévin Estre from France and the Austrian Richard Lietz. They won in a race characterized by capricious weather and thus ensured the seventh overall success of Porsche at the long distance classic event in the Ardennes. Spark has produced the modelcars, limited to 222 pieces, in scale 1:43 under the item number SB251CK.

Keyword crazy weather: That racing cars do not look clean when they race through rain over hours is needless to say. Spark and ck-modelcars.de have taken this fact into account and bring technically fantastic reproduced nine-elevens in a dirty race version, which reflect the contaminants from the initial phase of the race. The rain played the main role at the 24-Hour classic race in Belgium right from the start. In early Sunday morning the race had to be interrupted for almost six hours due to heavy rainfall. Having fallen far behind due to a drive-through penalty in the evening, the team embarked on an impressive chase at night. When the race was abandoned, the driver trio was already in eighth place after faultless and consistently fast stints in the rain at Spa.

Two hours before the end, the GT3 R with Kévin Estre at the cockpit were in the lead, which the French defended sovereign until the end with treadless tires and wett track. Thereby, Porsche could cheer for a victory after a long time at the prestigious endurance classic race in the Ardennes. "The last success lays nine years behind. Now staying on the podium as the winner is a great performance", says Sebastian Golz, project manager Porsche 911 GT3 R: "Congratulations to the team of GPX Racing and the three successful pilots, who laid the foundation stone for the success with their outstanding performance in the rain. The whole team worked with focus and the Porsche 911 GT3 R ran like the clockwork, literally!"

The Porsche 911 GT3 R with the starting number 998 from Rowe Racing went through comparable highs and lows on the 7.004-kilometer long circuit. In the final phase of the race, he made Porsche's double victory perfect. The Porsche customer teams crowned their strong and closed appearance at the 24 Hours of Spa-Francorchamps with three other top ten finishes: the Porsche 911 GT3 R from Rowe Racing with the starting numbers 98 and 99 took fifth and seventh place. The identical nine-eleven from KÜS Team75 Bernhard with the starting number 117 - also available as models from us - finished ninth. The miniatures of the winner, now individually numbered exclusively at ck-modelcars.de, with their dirty race version make up a very special charm that the collectors should not miss.

Here: Click to the modelcars of the winners of the 24 Hours of Spa 2019