With 2 miniatures in Indian red and White the company Schuco now supplemented their specialist trade program and brings the top model of the series in a top quality. 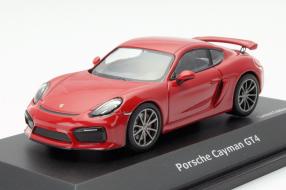 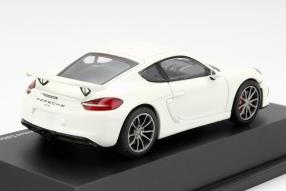 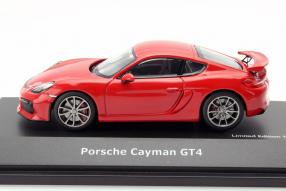 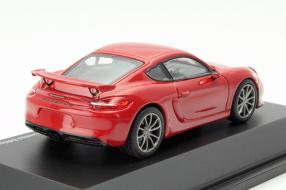 Is there a better way to start the week after a beautiful autumn weekend than with a model car of the Porsche Cayman GT4? We believe not. Except perhaps behind the wheel of a GT4 on the road instead for the showcase. But whose heart for large and small cars will be inspired by the novelty in Schuco Traders program, because cooperation between the Stuttgart sports car manufacturer and Fürth model AutoLabel culminated in a down to the last fugue detailed car model; in a miniature, which knows how to inspire with her finish.

Only at the beginning February 2015 was the new Porsche Cayman GT4 presented to the public; exactly one month later was the advertising model held in Racing Yellow introduced as a model car. The model car is similar in appearance to the prototype from Zuffenhausen.

Engine derived from the 911 Carrera S

You'll need 85776.00 Euro if you want to park the prototype presented on 04 February 2015 in your garage. Indian red and white are considered standard color and stay at no extra charge. The engine of the Cayman GT4 has been derived from the driving record of the 911 Carrera S and makes 385 hp / 283 kW 3.8-liter engine; the "old" Carrera S, however, the Type 991 before the facelift. One switches the loud Porsche full everyday practicality car per six-speed manual transmission with dynamic Transmission mounts.

Of course, the model is little to see, because doors and hoods are closed. Nevertheless, making the Cayman GT4 from Schuco a lot of fun. Exemplary the headlights and their inner workings have been worked out; angry black looking and so the power of a life on the racetrack wiederspiegelnd. Consuming and prototypically the grill grids were designed in the front apron.

Many delicate details are reasons for good mood.

The 20-inch GT4 wheels are also well modeled, the aluminum-alloy wheels including brake discs and red calipers. Praiseworthy: The finish of the air vents on the fenders that give the six-cylinder mid-engine air to breathe. Particularly impressed us the filigree holder of the fixed rear wing, which belongs to Aerodymamikpaket of GT4. The two bi-color painted door mirror housings, spoiler edge of the tailgate and the diffuser consuming tell of great attention to detail in the form of farmers from Schuco.

The interior features the dashboard, the center console and the seats very well; the latter are real bucket seats. Schuco has long since caught up with the level, the Minichamps once presented the replica of seats and interiors. Also dashboard and coloring of controls deserve the highest praise. Anyone who wants to park one of the GT4 at home, let him hurry: Only 1,000 pieces of coveted models are given to world.