Shortly after the premiere of the role model, Minichamps presents the modelcars to the new top version of the model series 992 in scale 1:43 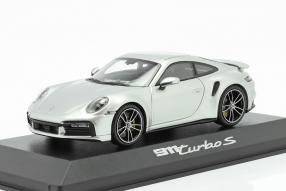 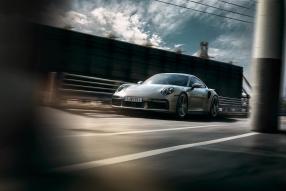 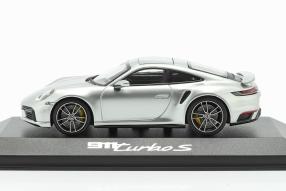 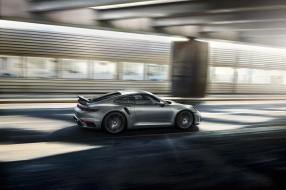 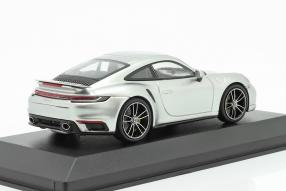 At the beginning of March 2020, the sports car manufacturer Porsche presented the new generation of the 911 Turbo S and announced the top version as stronger, more dynamic and comfortable than ever. The sports car, based on the model series 992, comes directly as coupe and cabriolet and starts with a new 3.8 liter six-cylinder. Porsche numbers the power with 478 kW / 650 hp. Supported by two VTG-chargers, it is 51 kW / 70 hp more compared to the previous version. The maximum torque now reaches 800 newton meters (Nm) and thus 50 Nm more than the type 991. At the same time of the presentation of the Porsche 911 Turbo S, Minichamps has delivered the modelcars to the coupe: In the advertising packaging typical for Stuttgart under the item number WAP0201780K and in the classic color GT-silver. In our shop it is very popular: don't worry, supplies are on the way!

It can be taken for granted that Minichamps perfectly transferred the shape and appearance of the new Porsche 911 Turbo S to the scale 1:43. It is not a copy of the predecessor, because the 911 Turbo S of the 992 series has grown significantly: the body is 45 millimeters wider on the road above the front axle (1,840 millimeters), the total width now reaches 1,900 millimeters (plus 20 millimeters) above the rear axle ), so a whopping two centimeters more! The track has increased by 42 millimeters on the front axle and ten millimeters on the rear axle. The larger rear wing is designed for even more downforce. These are changes that Minichamps naturally had to take into account when developing the diecast modelcars.

Appearance of the new Porsche 911 Turbo S in 1:43 perfect

The new front section with widened air intake openings is turbo-typical with double front lights and standard LED matrix headlights. The newly shaped and - in the prototype, not in the model - pneumatically extendable front spoiler and the enlarged rear wing achieve a 15 percent higher downforce level. The slim waist of the Porsche 911 Turbo S emphasizes the powerfully modeled rear fenders with the integrated air intakes. Turbotypically angular double tailpipes in high-gloss black complete the new rear view, which Minichamps has translated perfectly into the miniatures. In the interior, the quilted seat backs are striking: a tribute to the first 911 Turbo in the 930 series. The 992 Turbo S reaches 100 in 2.7 seconds; It drives 330 kilometers an hour. Its price: 218,181 euros, the coupe costs in Germany.