Next to the version in scale 1:43, Norev has now also delivered the bigger modelcars of diecast 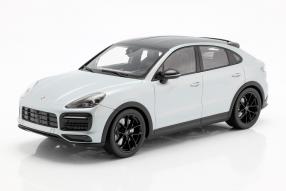 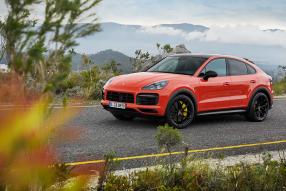 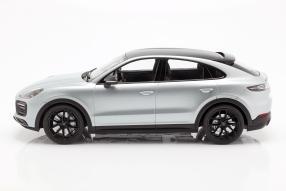 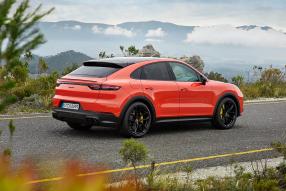 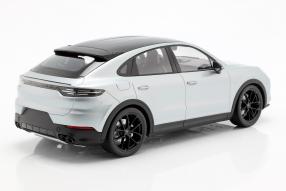 The modelcars for the new Porsche Cayenne Coupé in the colors quartzite grey, white and lava orange are already familiar to us, because the French from Norev had delivered these in scale 1:18 already in September this year. Now the miniatures reached us in scale 1:18, in which the Porsche Cayenne Coupé has for the moment the color dolomite silver metallic. They appear under the item number WAP0213220K. The specialists among our readers will know by the designation that it is about Porsche-advertising-models in the typical packaging from Stuttgart. As with the smaller versions, the team from Vaulx-en-Vaulin, not far from Lyon, did a first-class job and converted the five-door luxury-car of the third generation of the model series in an examplary way into the so-called Bburago size; including steerable front wheels.

"The Coupé includes all technical highlights of the current Cayenne, positions itself however more progessive, athletic and emotional by a still dynamic design and new technical details", so Oliver Blume, CEO of the Porsche AG. There are two roof concepts: A standard panoramic fixed glass roof as well as an optional carbon roof. Norev decided for it: The modelcars of the Cayenne Coupé have received a replica of the sporty-looking roof. The French also have replicated the fixed roof spoiler and also a 20 millimeters lowered windscreen and A-pillar compared with the Cayenne. That counts also for the new designed rear doors and fenders, which widen the shoulders of the vehicle by 18 millimeters and thus contribuet to the muscular overall impression.

The Cayenne Coupé with six-cylinder turbo-engine and 3.0 liter of displacement developes 250 kW / 340 hp and a maxiumum torque of 450 Nm. The standard sprint from zero to 100 kilometers is done with the standard Sport Chrono-package after 6.0 seconds. With the optional lightweight sport-package, the value is reduced to 5.9 seconds. The top-speed is indicated with 243. As top-model, the Cayenne Turbo Coupé with 4.0 V8 with biturbo-charging, goes to the start with 404 kW / 550 hp and a maximum torque of 770 Nm. From a standstill, the Cayenne Turbo Coupé accelerates to 100 in 3.9 seconds. Top-speed: 286. The boot capacity is 625 liters and grows up with folded rear seats to 1.540 liters; at the Turbo Coupé from 600 to 1.510 liters. The price list starts at around 83.711,00 euros.

Here: Click to the modelcars of the new Cayenne Coupé