GT-Spiritmodels brings with the 999 units in red-black painting excellent miniatures to the tuned Mustang in scale 1:18 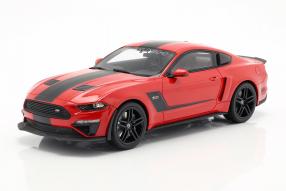 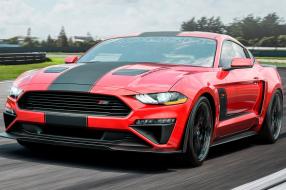 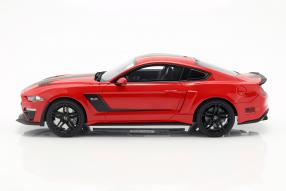 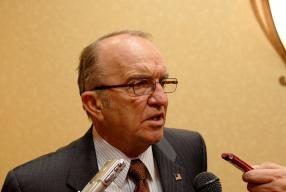 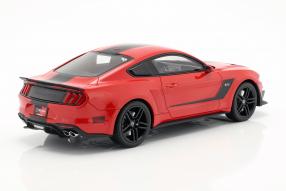 In times, where everybody is talking about the spread of electric cars, which should benefit the environment, even though the earth gets properly exploited with the extraction of the materials needed for the battery, the US-Tuner Jack Roush remains true to his line and relies on the Ford Mustang with its 5,0 liter big V8, whose power is increased by the compression technology from 343 kW / 466 hp to 530 kW / 720 hp. The car becomes also tuned in other areas, which the small series label GT Spirit or GT Spiritmodels has perfectly implemented with the modelcars under the item number GT260 into the scale 1:18. Published in a limited quantity of 999 units, this is a proof that the high-quality resin polyurethane is the ideal material for making small batches like these economically viable.

Significantly responsible for this are the lower demands on the mold making, the resine models provide to the engineers. Modelcars of diecast of such a model in the high standard of GT-Spirit, we certainly can not expect. Because the differences to the production version of the Mustang are not so small pronounced: Tuner Roush - consistently referred to in the media as the most prestigious address for the tuning of Fords - puts not only hand on the exhaust system and the engine, which is hidden at the model, but also in aerodynamics, wheels and the interior. As with resine modelcars usual hoods and doors remain closed, so we just see not very much from the drive set as the collectors have something of it that the driver of a Roush Stage 3 Mustang can adjust the volume of the exhaust system via app.

What we benefit more as a collector is the exterior and interior modifications made by the company based in Plymouth in the State of Michigan. GT-Spiritmodels has mastered perfectly how to transfer them to the modelcar. Let's take a look at the aerodynamics complete package: In the front is a grille with cross braces instead honeycomb grid used and the air inlet in the bumper was widened. The spoiler lip was extended around the corners in the side and pulled it up in the wheel hole. The air outlets on the bonnet are missing from the original vehicle; the stylized air intake at the rear fender and the spoiler are not to be found in this form in the normal Mustang. Just as natural as the plaques, which refer to the tuner Roush, who also operates motorsport.

The Roush Stage 3 Mustang made its debut at the New York International Auto Show and draws its power from a TVS-2650 supercharger that raises the maximum torque from 569 Newton-meters (Nm) to 827 Nm. GT-Spirit also authentically took the 20-inch rims into account when replicating the sports car and fitted them with Continental tires and printed the characteristic stripes on the modelcars. What astonishes us, but in principle still corresponds to the essence of the Mustang, is the comparatively low price, because at the time of its concept, the Roush Stage 3 was converted to about 51,000 euros - for a complete vehicle, not just for the tuning measures. For 720 hp that's a real bang and we think it's awesome that GT Spiritmodels has taken on this Mustang.