Many new modelcars in four different colors and rare units: The Discovery appears now in scale 1:18 in extraordinarily good quality 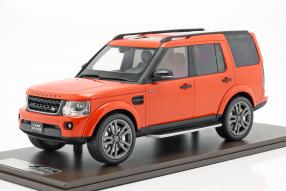 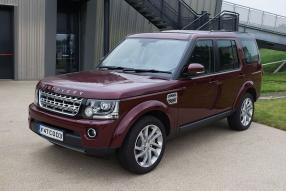 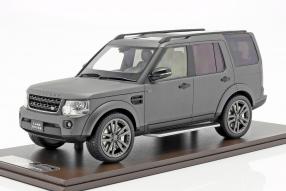 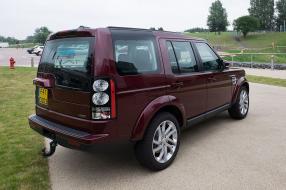 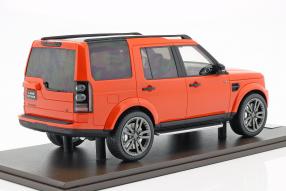 SUV's with the designation Discovery offers Land Rover since 1989 and thus expanded the model range below the Range Rover. Meanwhile a Discovery has grown into a handsome SUV, whose fifth generation is on the market since 2017. The relatively new modelcar label MotorHelix dealt with the previous version, the Land Rover Discovery IV 2016, of which four miniatures in four different colors in scale 1:18 have appeared; the last version of his generation. The models, made of high quality polyurethan resin are available in orange under the item number MH010NAO on 50 units, in white MH010ASW on 99 units, in red MH010MOR on 50 as well as in grey painting MH010CRM also limited on 50 units. Let's have a closer look on model and role model.

When we first have heard the name MotorHelix - so we quote from our article from last December to the Audi S8 plus of the same origin - we had to smile and think of the almost identical enigne oil from Shell. And we asked ourselves the question what is hidden behind the name. Motorhelix - ownspelling MotorHelix - is the brand of the Hong Kong MotorHelix Trading Co., Ltd; a company founded in 2016, whose team has worked in the industry for many years and is made of people who are fans of true to scale produced models from racing. The aim of the company is according to its own information, to produce autobile miniatures with good quality and high value. The focus is on the material resine, which is not unfamiliar to our readers, and whose low demands on mold making make such small series possible in the first place.

Motorhelix waives functional parts, but for that, the label highlights the unique capabilities of the resine plastic: "The material can be well processed to reflect the actual appearance of the car; even under the macro lens we would be presented with an exquisite replica. Due to the high value of the material and the abrasion of the mold, only a limited number of such models are brought to the market, which contributes to the high collection value." On the occasion of the Audi S8 plus and RS7 Sportback, we came to the conclusion that the makers do not exaggerate: There are very excellent modelcars that MotorHelix sells, which also exactly match the lines of their model in appearance and look. The grille achieves a level of detail and vertical integration that looks unattainably good. Which also applies to the interior.

And that is also considered at the Land Rover Discovery IV 2016, which also offers a glass roof at the model, because the luxury edition of what used to be referred to as off-road vehicles, indulges its drivers with elegant design inside and out, which was adjusted with this version more to the Range Rover. Basically, the fourth generation, built between 2009 and 2017, was just one of its predecessor's 2004 facelift. The 2016 model year range of engine powers ranged from 155 kW / 211 hp (diesel, V6) to 250 kW / 340 hp (Gasoline, V6), whose power was last transmitted only by eight-speed automatic transmission to the four-wheel drive. Well-preserved role models to the modelcars of MotorHelix are currently in the trade for 28,000.00 to 35,000.00 euros, depending on mileage and mostly with diesel engines.