The exclusive Team-Edition of the Audi R8 LMS 2016 is available as a set in scale 1:43 and limited to only 111 units. To this: The race car of the 24 Hours at the Nürburgring 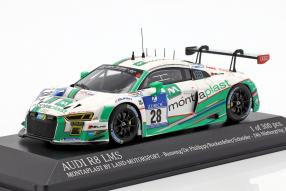 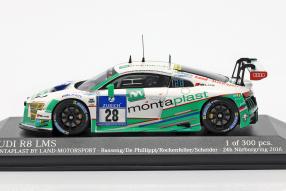 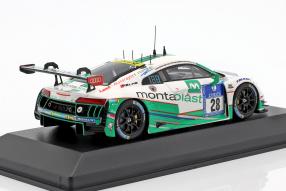 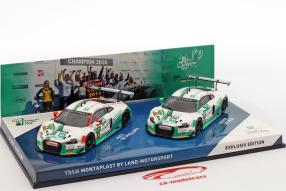 Wolfgang Land and his son Jochen have founded the common Team Land Motorsport in 1995, which set on the Audi R8 LMS in 2016. With this new car, which Audi had sold from 2015 after the rules of the groupe GT3, the second generation of the R8 went to the start at the race tracks. Minichamps reduced the racing cars of the Team Land Motorsport of the ADAC GT Masters 2016 as well as of the 24 Hours at the Nürburgring same year in scale 1:43. On the one hand, the single-item is available under item number 437161128, the car of Marc Basseng, Connor De Phillipi, Mike Rockenfeller and Timo Scheider; on the other hand you can have a set of the R8 under item number 472162829, which shows the Audi's from the ADAC GT Masters 2016: As exclusive limited Team-Edition not available in the regular trade.

In the league of the super sports cars, Land Motorsport relied the Audi with starting number 28 on its drivers Christopher Haase and Stéphane Ortelli at this time; Christopher Mies and Connor de Phillippi got the cockpit of the No. 29. While the single-item is limited to 300 units, the set of the Team-Edition is just limited to only 111 units. It comes in the known Minichamps-double-showcase to the collector. The people from Aachen have produced the modelcars of high-quality polyurethane resin. This goes hand in hand with excellent processing quality and the known high-quality detailing, which characterizes the motorsport modelcars of Minichamps commonly. The elaborate front and rear bumpers and the splitters and antennas are just hit as well as challenging the roundings in model making!

Powered by a 5.2-liter 10-cylinder in V-formation with 430 kW / 585 hp, the prototype of the modelcar single-item did not reach the set goal at the 24 Hours at the Nürburgring: it was over after just 67 laps. The team AMG Black Falcon won after 24:07:46,500 hours and 134 rounds. In contrast, Team Montaplast by Land Motorsport won the ADAC GT Masters 2016, ahead of Callaway Competion on the Corvette C7 GT3 and the KÜS Team75 Bernhard with the Porsche 911 GT3 R, the Audi R8 LMS came in first. The unique set is reminiscent of this successful year; In 2017, Land Motorsport also won the 24 Hours in the Eifel. In 2018, the Audi customer team from Niederdreisbach finished sixth there; In 2019, two and a half hours before the end of the race, it ended with a puncture.

Here: Click to the modelcars of Montaplast by Land Motorsport