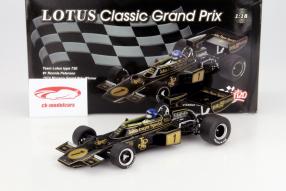 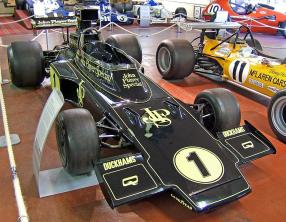 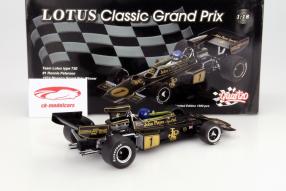 For Sunday 24/05/2015 the FIA World Council took the Grand Prix of Monaco 2015 Monte Carlo into the program, to that Lewis Hamilton with Mercedes F1 W06 drove. A look into the glorious history of car racing in Monaco grants the limited edition of 1,500 copies of the model car Lotus Typ72E from Ronnie Peterson, that is shown in the legendary gold-Black of the cigarette brand John Player Special. Manufactured by Quartzo it appears in the series Lotus Classic Grand Prix in 1:18 scale and with the start # 1.

Racing cars from this era were not as fully dressed as today's cars.  In this state it allows us an insight of the motor technology. The entire engine is open to see. Then as now, is a Formula 1 engine is a key part of the entire vehicle. While the passenger compartment also forms the chassis for the front axle, the flanged to the cockpit engine block is a key element in the underlying transmission, rear axle and the rear wing structure


Lotus 72 model for the Formula 1 today

Designed by Colin Chapman and Maurice Philippe of Lotus 72was used from 1970 untill 1975.   Chapman and Philippe introduced numerous innovations, but not all prevailed. With exception of the tanks, which housed for the first time in the middle of the chassis: An arrangement which has been maintained until today.

The prototype for the model presented here by Quartzo is now in the Donington Grand Prix Collection in British town of Leicester; the picture of it, which they used here, comes from John Chapman. The model white with the typical Quartzo extensive detailing attend, has working steering and presents you with a high-quality version of the painting.

The model car is now available under the article number 18290  and, at 64.95 euros, at the rather lower end of the price range for thishigh quality models from Formula 1 this size. Worthwhile the acquisition appears to us just for this reason, because the model reproduces the fragility of sensitive technology around the rear suspension so masterfully.  If we will say that in 41 years, to replicas of Lewis Hamilton's race car?