Two modelcars come from the production of Minichamps in scale 1:43, which celebrate their debut in two colors and limited edition 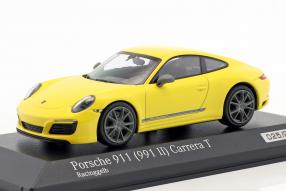 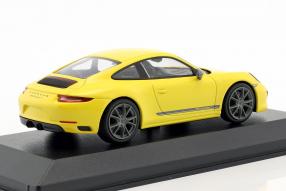 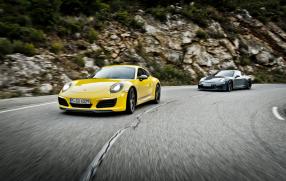 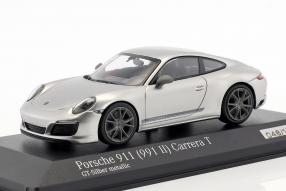 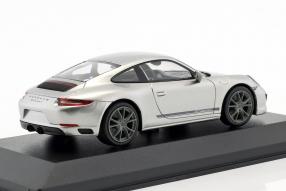 The decent, small stripes on the flanks reveal it immediately: The modelcars in racing yellow with the item number CA04319001 and GT-silver metallic (CA04319004) are about the miniatures of the Porsche 911 Carrera T of the model year 2018 and the modelseries 991 II. This model variant of the nine eleven, popular among the purists, was presented on Oktober 23rd in 2017 and is a version concentrating on the essentials as opposed to the Carrera. The motorization is the same: The six cylinder makes 272 kW / 370 PS. Different to the basemodel 911 Carrera, the customer can select a PASM-sport suspension with 20 milimeters of lowering, an additional cost all-wheel-steering and a mechanical rear differential lock. Above all, Porsche had the performance in mind and to improve this, the people from Stuttgart had reduced the weight.

For this purpose, the engineers have removed the rear seats, installed a rear glazing including the side windows in the rear of thinner glass and reduced the circumference of the insulating material. In this way, Weissach could reduce the weight of the Porsche 911 Carrera T by 20 kilograms to 1,425 kilos. The shorter geared, manual seven-speed gearbox is fitted as standard; Optionally, a PDK dual-clutch transmission is also available. Let's take a look at the performance: This nine eleven accelerates with manual transmission in 4.5 seconds to 100 kilometers per hour, with PDK in their 4.2. The top speed is given as more than 290 km / h. At the front, the Porsche 911 Carrera T has an aerodynamically adjusted spoiler lip.

The Sport Design exterior mirrors are painted in agate grey metallic. On the side, the new model can be seen on 20-inch Carrera S wheels in titanium grey. The driver takes place on black, electric four-way sports seats with seat center in Sport-Tex. The headrests are embroidered with black 911 lettering. The rear view is characterized by the slats of the trunk lid grille and the Porsche logo, the model designation "911 Carrera T" in agate grey and the standard sports exhaust system painted with the color black, centrally located tailpipes. The exterior colors include black, lava orange, Indian red, racing yellow, white and Miami blue as well as the metallic colors Carrara white, GT silver and jet black. We now have two of the colors at the modelcars, which trace the models in top quality.

Here: Click to the modelcars of the Porsche 911 Carrera T