The small series label has increased the range by the sports car out of diecast in scale 1:18 only at CK and modellissimo 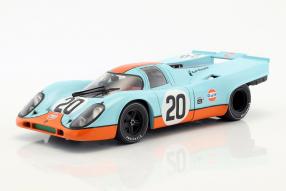 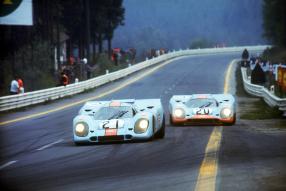 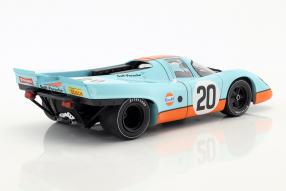 With the Porsche 917, the triumphal march of the Stuttgart began on the Circuit des 24 heures in Le Mans: It was 1970, when the rot-white painted Porsche 917 with short tail, used by the Porsche KG Salzburg, won the 24 hours of Le Mans with Hans herrmann and Richard Attwood. In the same year, the car builder started a collaboration with the racing stable of John Wyer, who had solved the stability problems at the 917 by adding little aluminum strips to the tail. He made the car mobil. With these optimizations Porsche and John Wyer Automotive Engineering went to the start of the 38th version of the motorsport classic event. The Porsche 917, driven by the factory drivers Jo Siffert and Brian Redman, was painted the same like No. 21 from Pedro Rodríguez and Leo Kinnunen, in lightblue-orange look of the oil supplier Gulf and marked with the start number 20.

Its model goes back to the prototype, which was presented in 1969 at the Geneva Motor Show, but disappointed in the year of its debut by the driving characteristics ago. The built in all Wyer-917 twelve-cylinder mid-engine took out of its 4.5 liters around 383 kW / 520 hp. The engine was cooled by a fan wheel above the engine compartment. The Porsche 917 was to prove to be one of the most successful racing sports cars of the 1970s, whose significance for Porsche is to have achieved several overall victories in sports car racing for the first time in the then largest capacity class. As we know today, the Stuttgart have achieved 19 overall victories at Le Mans, but retreated before the 20th success from the highest class LMP1 and dominate now with the Porsche 911 RSR GTE the category LMGTE Pro.

And exactly to the Porsche 917 of the year 1970, the small series label CMR presented an excellently processed minitaure in scale 1:18, made out of diecast zinc, with the model CMR127. The diecast miniature reproduces the legendary sports car prototype in terms of appearance perfectly and corresponds exactly to the model of the racetrack. The build quality is excellent: glazing and headlamps, the taillights and the engine / gear unit are made very solid by hand and in the finish so mostly only found on higher priced modelcars. Incidentally, No. 20 also adorns the front-page photo of our Twitter account; the item number CMR128 will emulate number 21.

Here: Click to the modelcars of the Porsche 917 from CMR