The small series manufacturer maintains the Stefan Bellof Collection with other miniatures after the models of the Porsche 956 in the scale 1:43 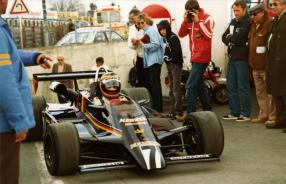 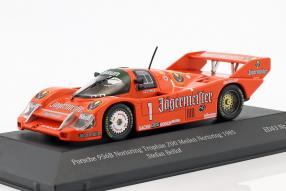 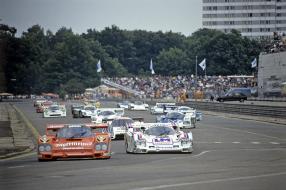 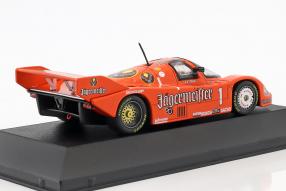 Yes we know, don't worry, the Throwback Thursday, on which one remind to nice events on the internet, was yesterday. But anyway, we want to take the opportunity for this article of the extension of the modelcar program after role models of the race cars from Stefan Bellof, to briefly recall a highlight from the career of the unforgotten racer from Giessen: On March 21st in 1982, Stefan Bellof had celebrated a great debut in the Formula 2 European Championship and won the first race of the season in a Maurer MM82-BMW, which took place at the British Silverstone. This was by the way a premiere in another way: He had worn a black helmet with the round about stripes in red and yellow desing for the first time, which was designed by his former partner then, specifically for him.

This premiere lays 37 years back, but the memory of the racer, born on the 20th November 1957 in Giessen - who died too early at the age of 27 in an accident in Spa-Francorchamps - is unbroken. He will be remembered for his heartfelt laughter, his poise and his breathtaking achievements. The attached photo shows him in the naturally aspirated MM82-BMW at the Eifelrennen 1982, where the helmet can be seen. In the following years, Bellof remained loyal to him, where he won the 1984 World Endurance Championship for Porsche or in which he started in Formula One in 1984 and 1985 for Tyrell. None of the modelcars of the Tyrrell 012 by Minichamps in scale 1:18 omits this detail. But let's take a look at the miniatures of the Porsche 956 from CMR.

CMR gives an exciting retrospective look at the Gießeners' production cars under the title Edition 43 / Stefan Bellof Collection. Brand new is the so-called No. 25, which reflects the Porsche 956 in the look of the sponsor Jägermeister, in which Bellof achieved the fifth place at the Norisring trophy 200 miles Norisring 1985. The picture of the Porsche AG shows the vehicle on the left in the picture; on the right Manfred Winkelhock tries to pass. The models of the Porsche 956B, like their brothers, are made out of diecast and, for the price, real hitters in the field of modelcars based on role models from motorsport. Let we speak a team member from Brun Motorsport. Rudi Walch, at that time technical engineer at Brun Motorsport, put it in a nutshell: "Stefan was the best of all drivers, he was a thoroughbred racer, who also got out everything even from a scrap car."

There is not much to add to that. At the moment we have 14 modelcars recalling the races, where Bellof was a factory driver for Porsche in the Rothmans-956 at the Nürburgring in 1983, in Le Mans in 1983, at the Norisring in 1983 or as part of the Stefan Bellof Collection by CMR as a private driver for Brun Motorsport in Brands Hatch 1984 or Hockenheim graduated in 1985. Click on the link below to get to the overview. This will give you the opportunity to close gaps in your collection and retell the story of Stefan Bellof in your showcase.