With the downsizing of the W 463 series, the people from Aachen fished almost literally a big fish again: we present the miniatures in scale 1:18 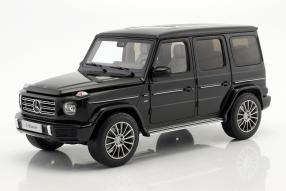 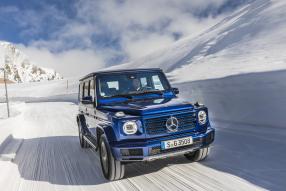 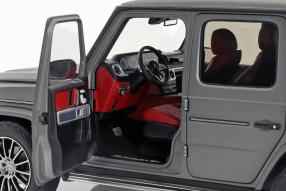 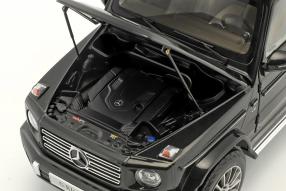 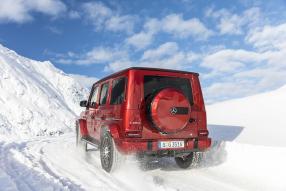 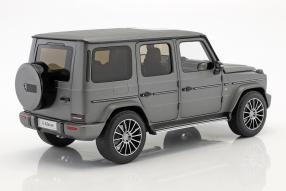 Minichamps received the license to replicate the new, with the series designation W 463 provided five door SUV of Mercedes-Benz, which has retained the previous, internal identifier: The first advertising models of the brand new G-Class came in the colors emerald green under the item number B66960810 and designo platinum magno (B66960811) for collectors. The Aacheners have shown once again what they can do: they deliver immaculately crafted diecast bodies and give the models a lifelike and lavishly appointed interior, a detailed engine compartment, steerable front wheels, an opening bonnet, four functioning doors and a door to the trunk. The modelcars appear in the usual for advertising models Mercedes-Benz outer packaging.

The new G-Class was presented to the public for the first time on January 17, 2018: Dieter Zetsche and Arnold Schwarzenegger were the godfathers at the NAIAS North American International Auto Show in Detroit. As mentioned, the serial number was maintained despite enormous changes in concept and design: The total length of 4,825 millimeters is 53 more than its predecessor. The width now offers 121 millimeters more space. The legroom at the front has increased by 38 millimeters, the rear around 150. The shoulder room at the front and back has grown by 38 and 27 millimeters respectively. In the elbow width, the G-Class has won by 68 and 56 millimeters. The rear seats can be folded down to 60, 40 or 100 percent. The newly developed chassis was developed in cooperation between Mercedes-Benz and the Mercedes-AMG GmbH.

The result: A single wheel suspension with double wishbone front axle in combination with a rigid rear axle. From the outside, not much has changed at first glance: the distinctive door handle, the robust outer protective strip, the exposed spare wheel on the rear door and the surrounding roof edge are just as familiar as the angular silhouette with the outer door hinges and the overlying bonnet. The grille now looks rounder and therefore more harmonious. All surfaces of the off-roader are drawn firmer; implemented well into the model by Minichamps . The surface quality is higher due to the narrower, more precise joints and more harmonious transitions than its predecessors. The wheel arches and the bumper were more integrated into the body and appear less additive.

So the car looks more like from the same mould than the earlier series W 460 to W 463. The round headlights - now with LED technology - and the flashers sitting on the fenders and the handle in front of the passenger have remained. The G-Class has slimmed down about 170 kilograms through a material mix of solid, high-strength, ultra-high-strength steels and aluminum as well as improved production processes in the Austrian Magna Steyr factory: The body is made of different types of steel; Mudguards, bonnet and doors are made of aluminum. The Aachener have implemented the subtleties of the new G-Class right down to the reduction of the V8 petrol engine, which generates 310 kW / 422 hp from 4.0 liters of capacity at the role model and presses a maximum torque of 610 Newton-meters (Nm) thanks to its two turbochargers to the nine-speed automatic transmission braces.

The new in-line six-cylinder diesel delivers 210 kW / 286 hp and is stronger than ever before with a maximum torque of 600 Nm at 1200 to 3200 rpm. At the same time, the new suspension, the Dynamic Select driving modes, the so-called G-mode and the three 100% differential locks increase the ride comfort and agility. But of course, the collector of high-quality modelcars does not have much from that. What we particularly like about the model are the window frames, their printing and the quality of the pass. The doors close with small gaps; The paint and the execution of the wide ramming strips are just as excellent as the layout of the headlights. The models for the new G-Class in 1:18 have become a real hit!

Here you come to the new modelcars of the G-Class