The three modelcars out of diecast arose after a role model, which exists only by a small series and inspire with first class workmanship 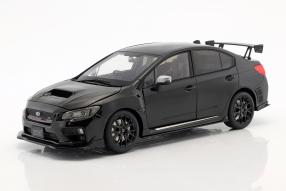 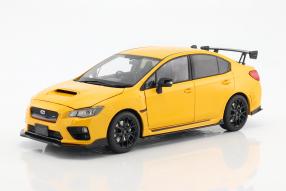 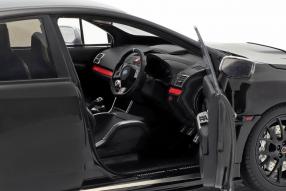 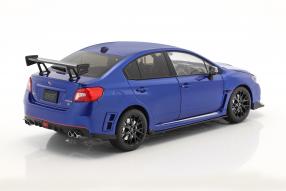 For the weekend we want to recommend you a miniature, which has it all: The model of the Subaru S207 made out of die-cast zinc and in scale 1:18 fascinates us from the model choice as well as by the execution of its details. The appearance of the lines is perfectly in line with that of the prototype; the interior offers no cause for criticism. But that's not all: there are very rare modelcars in this price range, which have such detailed replicas of the engines under the hood: ignition distributor, cables, labeled lid of liquid containers, pipes, cylinder head and strut bars - we can barely let to see the view from the scaled down, in the prototype of 241 kW / 328 hp 2.0 liter four-cylinder turbo boxer engine with 431 Newton meters (Nm) maximum torque, so good is the versatile colored miniature succeeded.

The two doors and the hood can be opened, which is sufficient. Because too much would not be seen in the trunk anyway: more interesting than an empty plastic cave is the rear spoiler on the lid back anyway. Standing on fine struts, the wing offers just as much workmanship as all the headlight inserts on the front, the grille and the elaborate front spoiler. Everything fits perfectly; the interior of the lamps can not be bettered. The replica of the tires and the brake system also know how to convince. The interior of the model not only corresponds formally to the role model, but also has to offer a lot of colors and colors to the printing of the power window switch. Pedals, steering wheel, sports seats - really cool, what Sunstar delivers there. The modelcar also has separately fitted door handles.

That the absolutely successful and in the appearance artisan successful modelcar as mentioned meets the lines of the prototype, therefore, not surprising. That the small S207 is designed as a right-hand drive, has a reason: The model was only available in Japan. The S207 is based on the Subaru WRX STI and was unveiled at the Tokyo Motor Show 2015. The special series, which is based on the model with the item number 5553 and which is to commemorate the class victory at the 24 Hours Nürburgring, includes only 400 units. The cars received electronically controlled dampers on the front axle, the steering was translated more directly and the brake system was equipped with six-piston monobloc pliers in the front and new four-piston pliers in the rear. Also redesigned were the 19-inch special wheels, which wear tires of dimension 255/35.

The large, already mentioned rear spoiler made of carbon was therefore just as obligatory, as new side skirts and Recaro sports seats inside. The sticker on the center tunnel designates the serial number of the special models. The NBR has red seat belts, black rims and additional NBR emblems. The buyer, who has opted for the also available NBR Challenge Package Yellow Edition (5551), can also look forward to the black-painted exterior mirror housings and the corresponding side skirts, which are complemented by yellow sidebars with S207 logo. The variant in blue paint (5552) is no less attractive. We think that the model is more than worthy of the strong role model and just think this model is awesome!