Matrix is one of the small series manufacturers that build modelcars based on role models that basically nobody knows. Here is a prime example 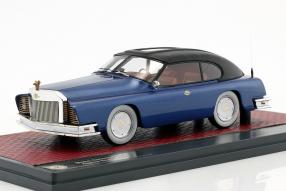 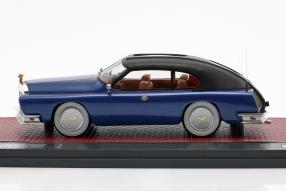 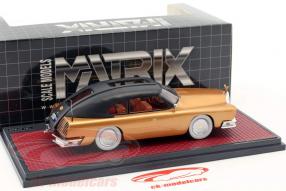 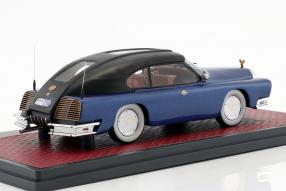 Diligent readers of our blog know that the use of the polyurethane cast resin due to its lower demands on mold making make small series in model making economically possible. Modelcars owe their existence to this fact, which would not be built due to the expected low number of diecast sales. The Mohs Ostentatienne Opera Sedan in scale 1:43 is such a model of which there has not even been a mass production of real vehicles: only a single car of this pattern was made according to builder Bruce Mohs. A series was indeed conceived, but the development of the car had other backgrounds. No wonder, his exotic design probably broke all the limits that were conceivable in passenger car production - and are. We look at the model and summarize the details of the model.

The Wisconsin-based Mohs Seaplane Corporation was founded in 1948 by Bruce Baldwin Mohs and dedicated to the production of hydroplanes and scooters. The Mohs, known as a tinkerer, started in 1967 to build cars for a reason. From Ostentatienne there was one vehicle; from the successor Safarikar only three. Nevertheless, Mohs wrote automotive history with his first creation. He presented the Ostentatienne 1967 before and surpassed the 6.3 meters in length, all previously known production cars. The limousine had no doors, because steel beams were installed in the sides, which should serve the safety of the inmates. The entry was possible through an unusual tailgate upright; the aisle between the seats by reminding of boarding in an airplane.

Inside the Ostentatienne, built on an International Harvester truck chassis, pure luxury dominated: walnut root wood dashboard, instruments covered with 24ct gold, Chinese carpet, velvet seats, refrigerator and gas cooker. The grille should remind of Rolls-Royce and to top the impression of the British the overhangs of the Ostentatienne had to be longer. The truck engine of International Harvester was a V8 with just 5.0 liters capacity; 145 kW / 197 hp strong. Performance? By the way, because Mohs possessed at that time numerous patents for safety devices, for whose marketing he built the Ostentatienne; baptized with a neologism that the English ostentatious - pompous - borrowed and should give the car a touch of French elegance.

After 20 years from deep sleep brought to life

After his time as an everyday car of Bruce Mohs, the Ostentatienne was to see in the in-house museum, which - as reported in the report in Autobild, in which we came across our research - bordered on an also in-house restaurant with the name "German Restaurant". For 20 years, the single piece disappeared until it was restored by students in 2009. The modelcars in the second livery of the single piece reproduce the details perfectly: the mesh panels on the front and rear, the headlights and taillights behind, and the interior of the Mohs Ostentatienne Opera Sedans, available in MX 400306-012, limited to 199 units in blue livery inspire with the high-end quality known for the label.