ck-model cars and Minichamps have jointly produced a new exclusive model. The white Porsche is only available in Asslar. 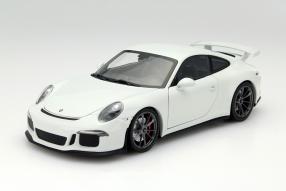 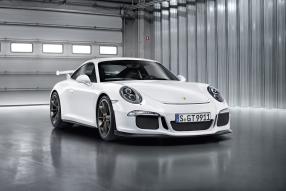 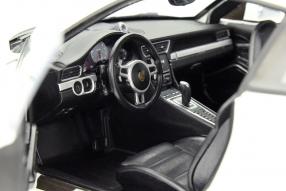 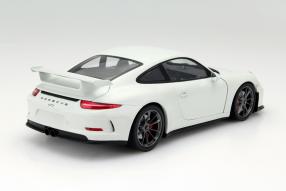 The Porsche 911 GT3 is perhaps the hottest iron among  the nine-elevens .Also from the series 991 the car maker from Stuttgart  has launched a version rich of tradition. The model car dealer ck-model cars and the preferred supplier for advertising models after models of the Porsche brand known label Minichamps developed a beautiful model of the 911 GT3 from 2013 in scale 1:18  held in white. The series has already published car models for this model, and for this label perfectly complemented. In addition to the already  available built in color Agate Grey Metallic version  under item no 110062720 , Minichamps brings at the same time a new model in Guards Red (WAP021037OE): The new white and red model we show in the video.

Porsche 911 GT3 as a special edition of ck-modelcars

The  online retailer and dealer ck-modelcars, headquartered in Asslar  near Gießen, now  offer their friends a limited edition of 504 copies  of the 911 GT3 version, which can be ordered under the number 113062721 for only 99.95 Euro . The built in 1:18 scale model, like its sister models  offers a variety of details, available in the  color white only  at ck-model cars . We pay particular attention when assessing this miniature on the quality of the implementation of the form and appearance of the model: Both has been  transferred to the highest level on the model die-cast zinc, by the engineers from Aachen. The all-around opening doors and hoods close tightly and flush with the body. Just like in the 137,303.00 euros original – there is not much to see.

Specifications of the 911 GT3

Under the front hood  a carefully disguised model trunk can be seen, under the hood at the rear  only disguises of the expensive six-cylinder engine like the prototype . The Porsche 911 GT3 Series 991 brings out its distributed on 6 cylinder 3.8 liter engine capacity of 350 kW, a / 475 hp, which rest at 8,250 revolutions. Its maximum torque is  440 Newton meters (Nm) at 6,250 rpm. Porsche raised  the 911 GT3 by 25 hp and combines with this naming 2 models: The Sport versions of the nine eleven named  Carrera RS from 1972-1997, starting  in 1999   the race cars among the nine elevens  received the abbreviation GT3. The 911 GT3 accelerates from 0 to 100 in 3.5 seconds; the speed limit is indicated 315 kilometers per hour.


Of all the beautiful art - as already mentioned – there is  not much to see on the model. But the interior of the sports car makes up for it  because  Minichamps  as the responsible manufacturer went all out. Both the appearance of the instrument panel as well as the center console, the seats and the side panels are all comfort features taken from the 911 turbo. The team led by Paul G. Lang and Romy has only over the stern driven GT3 transferred carefully to the model. The controls are prototypically colored and how the multimedia screen and easy to read. The two-toned replica multifunction steering wheel acts on the steerable front wheels; Vehicle floor and seat surfaces are very similar to the model in the optic. We think: The new GT3 and its versions yield considered by itself a beautifully accrued end, manageable this criteria, but also complement 911 collections perfectly.