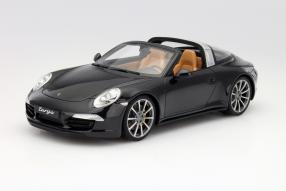 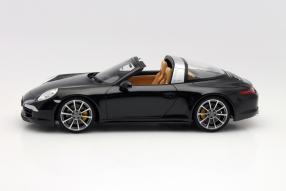 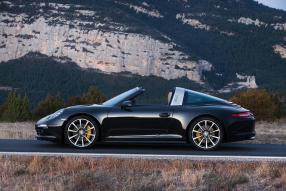 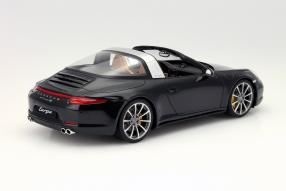 Just at the beginning of June 2015, I as a blogger at ck-model cars,  wrote something about the new Porsche 911 Targa 4 GTS in 1:43 scale - now it is again something to blog about: We provide you with the model car 911 Targa 4S Series 991 in  scale 1:18 a really great special model which the small series label GT Spirit built exclusively for our company. Theme? What am I saying? The sports car is made of the trendy polyurethane casting resin  and  full of details and classy  craftsmanship.  So it is not just something to blog about, but THE thing to blog about on its day of arival to Asslar. Only 504 copies are available for 89.95 Euro each  under item no ZM012 .  Painted in noble deep black it fascinates at first sight , such a classy look that makes me almost giddy with awe. Which is bad for writing.

But whatever is labled Porsche  also has impressive quality . Just like  with the Porsche 911 Targa 4S by GT Spirit. The model celebrated its debut at the North American International Auto Show NAIAS 2014 . With the 991 Porsche the  traditional Targa look came back, at least visually, a wide, silver-colored aluminum roll bar with the famous logo just above the body. The 911 Targa is more or less an integral part of the model range of Porsche since 1965 . The series 993 and 997 Porsche had deviated to the effect of the concept of combining only an all-glass roof tailgate together with the famous name. The current version has the familiar look again, but works completely different, because the former issued increasing by hand roof midsection is now electric under the rear window

The spectacular procedure of opening is of course not experienced the buyer of the 911 Targa 4S by GT Spirit. Doors and hoods remain type-conditionally closed. The sharpness with which the team has made the French Josselin components, helps you get over it: Considering the perfect adaptive headlights with their meticulously recreated inside delights me as a fan. The engravings of the doors and hoods convey realistic impression of how the joints look at the model. An absolute highlight are the ten-spoke rims that have taken the light-alloy wheels with 20-inch Carrera Classic (1.071,00 Euro cost)they leave sufficient space  for a look at the ceramic brakes and perforated brake discs.


Interior with finish that is worthy of the name Porsche

The tail lamps with the continuous light band are also fitted perfectly into the environment and the body of transparent red plastic; complemented by white reversing light strips. The interior has  been reduced lovely in  detail, which is visible  looking at the right side of the vehicle alone: the instrument panel corresponds in its appearance precisely to that of the prototype; Seats with leather paint, the center console and the linings of the door panels  deserve applause equally - from me and hopefully you too! A final word: 13 percent of all currently sold 911 are  Targa. The 911 Targa 4S provides 294 kW / 400 hp from 3.8 liters of displacement, which are spread over 6-cylinder and generate a maximum torque of 440 newton meters. Just a very hot topic, this 911. In every size.